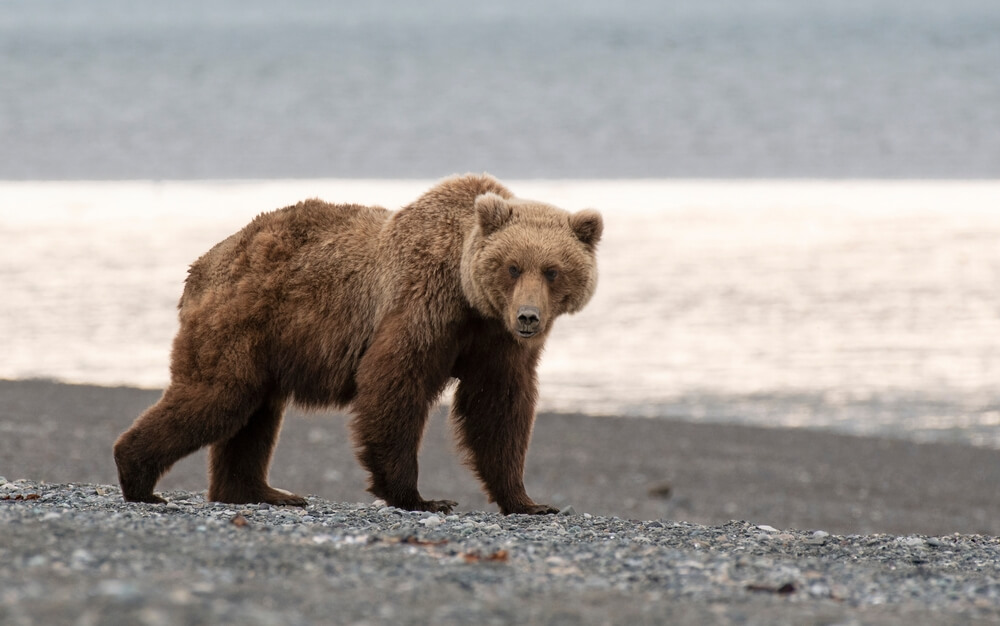 Apex predators are an important part of their respective ecosystems. By regulating the population and supplies of other animals, they maintain a healthy level of biodiversity.

But these predators aren’t always aggressive. In fact, a large part of being the apex is simply being too large to become prey.

Because of this, even animals with diets consisting mostly of plant matter can be apex predators. This includes many of the eight bear species in the world.

Most bears are apex predators. They have few to no predators of their own. The only bear species that aren’t apex predators are sloth bears and Asiatic black bears. Bears hunt anything from rodents to large animals such as moose and elk. The only animals that consistently prey on bears are big cats, which typically go after cubs, and other bears.

Why Are Bears Considered Apex Predators?

In short, if a predator is too large or difficult for another predator to take down, then they’re apex. This is why most bears are apex predators, even if they don’t actively prey on other animals with great frequency.

Most bear species are opportunistic predators, and their primary sources are insect larvae and fruit. They may also eat fish, depending on the season and environment, but few eat anything larger than that.

Despite their diets, bears are so large that they are rarely prey after they reach adulthood.

At worst, large cats or canids such as wolves may sometimes eat bear cubs. But even this is difficult for other large predators, as female bears will aggressively protect their young.

Even giant panda bears, whose diets are 99% bamboo, are scientifically apex predators. As adults, they’re too large and strong to become prey, and they occasionally do eat small mammals.

Polar bears are some of the most aggressive carnivores among all of the bear species. They have to rely on predation because of the sparse vegetation of their environment.

Other than humans, polar bears are the apex predators of the Arctic.

They regularly hunt large fish and seals, and even other polar bears. Males sometimes prey on polar bear cubs in their vicinity.

Because of this, females with their cubs tend to avoid adult males after mating.

“Brown bears” refers to all members of the Ursus arctos species. With the exception of the grizzly bear subspecies, brown bears are not as carnivorous as polar bears. They tend to eat fruits, nuts, and a wide range of plants like grasses and roots.

In other words, brown bears are omnivorous and voracious. They will eat small mammals and insects as well as plants. In fact, moth larvae are one of their most important sources of protein.

Although they don’t hunt large animals as much as polar bears, brown bears are still apex predators. Their size and aggression mean that other animals rarely prey upon them.

“Grizzly bear” is not really a separate species from a brown bear. Scientists consider it a subspecies of Ursus arctos. In fact, it’s more of a regional term for brown bears in the Canadian Rockies and other areas.

Having said that, grizzly bears in those areas tend to be more aggressive members of the brown bear species.

They eat larger mammals with more frequency, including elk, moose, goats, and sheep. They will even hunt black bears if they share the same territory.

Even more so than other brown bears, grizzly bears are one of the apex predators of their environments.

There are two distinct species of black bears in the world. These are the Asiatic or Asian black bear and the American black bear.

Despite sharing the name “black bear,” these animals have different habits and environments that affect their status as apex predators.

The Asiatic black bear will eat almost anything, from tubers to livestock. They will also eat the carrion that other predators leave behind.

However, they are also one of the few bear species that has a natural predator besides humans. Since Asiatic bears are scavengers, they like to eat the kills of the Siberian tiger.

American black bears, on the other hand, are apex predators despite not being as carnivorous as Asiatic black bears. They are much more opportunistic feeders and not active predators. Most of the vertebrates they eat are carrion.

Like other bear species, the size of American black bears protects them from predation. Sometimes wolves or mountain lions may attack black bear cubs.

However, other animals rarely kill adult black bears, with the exception of humans. This means that American black bears are apex predators.

What Are Apex Predators?

An apex predator is an animal that preys on other animals but is rarely prey themselves. They are often the largest animals in that particular ecosystem. In fact, an apex predator in one environment may not be in another depending on their relative size.

Apex predators are key to a healthy ecosystem due to their support of biodiversity. They keep the animal population in check, balancing the entire chain.

Other animals may sometimes prey on apex predators, but this doesn’t change the rankings of the chain. For example, if resources are scarce, predators may attempt to thin out their rivals.

Are Bears The Strongest Predator?

Compare the strength of various bear species, their competitors, and some of the largest apex predators in the world below:

As the above chart shows, the polar bear is among the strongest apex predators in the world. They weigh twice as much as the heaviest grizzly and need immense strength to move that weight around.

They also have one of the strongest bite forces among apex predators. Only the gorilla has greater jaw strength.

The other bear species, while certainly large, don’t have the same bite force as other predators such as tigers. In short, bears appear to rely on their size more than brute strength.

What Other Animals Do Bears Hunt?

Many bear species eat fruit and plants as main staples of their diet. However, most of them do hunt other animals in some capacity.

For instance, some animals that bears hunt include:

There aren’t many animals that eat bears. This is because bears tend to be aggressive towards danger and are very large animals.

Still, some bear species are more vulnerable than others. In addition, bear cubs are sometimes the target of other predators, such as big cats.

This is because the cubs are less capable of protecting themselves than adults.

The sloth bear is also prey to tigers throughout areas of Asia such as India. They are also prey to leopards in these areas. Female sloth bears and their cubs will sometimes change their sleeping pattern to avoid these predators.

Spectacled bears are some of the largest mammals that live in South America. As such, they have few predators as adults.

But their cubs can sometimes be in danger of mountain lions and jaguars.

Many bear species are not as aggressive of predators as their physical appearance suggests. Their diets consist mainly of plant matter and very small vertebrates and insects.

However, preying on large animals is not the only factor in being an apex predator. In fact, how well an animal can defend themselves is often just as important as what they themselves hunt.

Most bears are apex predators simply because they can defend themselves from other predators. This is less about strength than it is size. Even bears who rarely eat other animals, such as pandas, are too large to become prey themselves.

Therefore, since most bears don’t have any natural common predators, they are often apex predators.