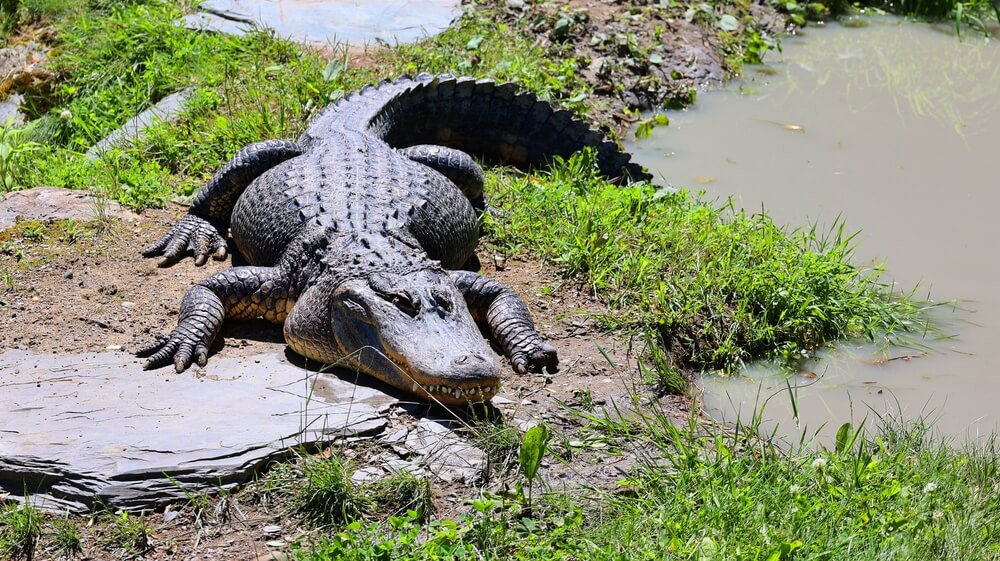 Alligators are reptiles. They belong to the taxonomic class of Reptilia, sharing many characteristics with other kinds of reptiles. These include 4-legged, cold-blooded, and vertebrate features. Alligators also lay eggs, have scales, and use lungs for respiration. These common physical and physiological traits are the determining factors for classifying the alligator as a reptile.

There are many kinds of reptiles all over the world. These include crocodiles, lizards, snakes, lizards, tortoises, and even the dinosaurs of long ago.

This article will further explain why alligators are reptiles as well as why they are not classified as other kinds of creatures.

6 Reasons Why Alligators Are Reptiles

All alligators are reptiles and come from an evolutionary line of archosaur pseudosuchians from 235 million years ago.

A fossil of an extinct freshwater alligatoroid, called the Brachychampsa, was discovered in 1911 and showed characteristics similar to the alligators of today.

Alligators are considered reptiles because they have the features and characteristics to be classified as them.

Read on to learn more about each of these reptilian features that are found in alligators.

Oxygen enters the lungs through the alligator’s mouth or nose. Reptiles, and therefore alligators, breathe in oxygen from the air in and through their lungs.

Alligators can be observed with their snouts just above the surface of the water to breathe. They have lungs that function like birds’ lungs.

As they breathe, the air moves in a unidirectional way, looping through the lungs, with a gas exchange process in parabronchi tubes.

Air comes in and out at the same time, which allows the alligator to eliminate gaseous waste, conserve energy, and prevent heat loss.

Interestingly, alligators can also remain submerged underwater for up to two hours by rationing the supply of oxygen to their internal tissues and organs.

Even though alligators are semi-aquatic, they can drown if they cannot access oxygen.

Alligators do not hibernate underwater, and therefore leave their snouts exposed to cold temperatures, while burrowing partially in water-filled, muddy banks.

Alligators cannot survive underwater indefinitely without coming up for air. Since alligators have lungs, they can also breathe when out of the water on land.

Alligators can take breaths periodically, several at once, or a single one. Their rates of breathing can happen from mere seconds up to 30 minutes later and in between.

Bubbles seen around alligators are not from regular breathing patterns. Rather it stems from infrasonic bellows that males produce to attract females.

Alligators have the reptilian feature of being vertebrates.

As mentioned further below, they belong to the phylum Chordata. This means that they have a “cord” (spinal cord) also referred to as the backbone.

An alligator’s spinal cord has 4 regions:

The caudal portion of the backbone extends into the tail, which is approximately 50% of the alligator’s total length. Alligators have powerful tails that they use to jump, lunge, and leap because they have this strong backbone.

Reptiles have four legs or they are descended from four-legged animals.

This includes animals such as alligators, crocodiles, lizards, snakes (vestigial), and turtles.

Reptiles have scales, and alligators are no exception.

Alligator scales, in particular, are bony and hard, offering a very strong layer of protection. These bony scales are made from keratin and are called “scutes” or osteoderms.

These scales also allow an alligator to detect movement, thermoregulate, use flexible movement, and use them as a source of calcium for eggs.

For example, an alligator may float up to the sun-warmed water’s surface, climb a tree, burrow in banks, or move onto land to warm up.

Due to the alligator’s ectothermic body, it can only live in places where it can thermoregulate and survive.

There are only two species of alligators in existence today, and they are found in freshwater regions of China and the United States.

In China, alligators are found living in the lower parts of the Yangtze River in Eastern China.

In the United States, alligators can be found living in North Carolina, in southern parts of Louisiana, Alabama, and Florida, and spreading west to eastern Texas.

Alligators are amniote, which is characteristic of vertebrate reptiles, mammals, and birds. This means that there is an embryonic or fetal development within a closed sac.

After mating, female alligators lay a clutch of eggs each season on average from 35 to 50 eggs and as high as 90 eggs.

These eggs are white, hard-shelled, and oval-shaped on the outside, with a soft leather-like interior layer.

The taxonomy of alligators shows that they belong to the Reptilia class, which includes all reptiles.

This class has four categories:

There are only two species of alligators and each table below shows their taxonomic classifications:

Why Is An Alligator Not A Mammal?

An alligator is not a mammal because it does not have mammalian characteristics. These include the lack of live births, fur or hair, and mammary glands to produce milk. Alligators are also not warm-blooded.

Alligators lay eggs, have scales, and thermoregulate. Instead of milk, alligator hatchlings consume small prey such as snails, minnows, worms, and crabs.

The following table shows a more detailed comparison of mammals and reptiles, highlighting some of their main differences:

Why Is An Alligator Not A Lizard?

An alligator is not a lizard because they have different taxonomic classifications, numbers of species, anatomical functions, habitats, and behaviors.

Here is a quick look at some of their main differences:

Why Is An Alligator Not An Amphibian?

Alligators are not amphibians, primarily because they do not breathe through their skin, have gills, or have larval stages in their life cycles.

Many amphibians have life cycle steps that take place both on land and in water.

Amphibians may have gills during the larval stage and then develop lungs as they mature. Others use cutaneous respiration (skin breathing), where the skin stays moist in order to absorb oxygen.

As mentioned above, alligators have lungs and lay eggs from which offspring hatch in complete form.

Alligators are reptiles because they exhibit their characteristics.

This includes the fact that they are cold-blooded, have scales, and lay eggs. Alligators also are 4-legged, have a spinal cord, and lay eggs like other animals in the class of Reptilia.

Even though alligators have some common characteristics with lizards and amphibians they are not the same. Furthermore, alligators are vastly different from mammals physically and physiologically.