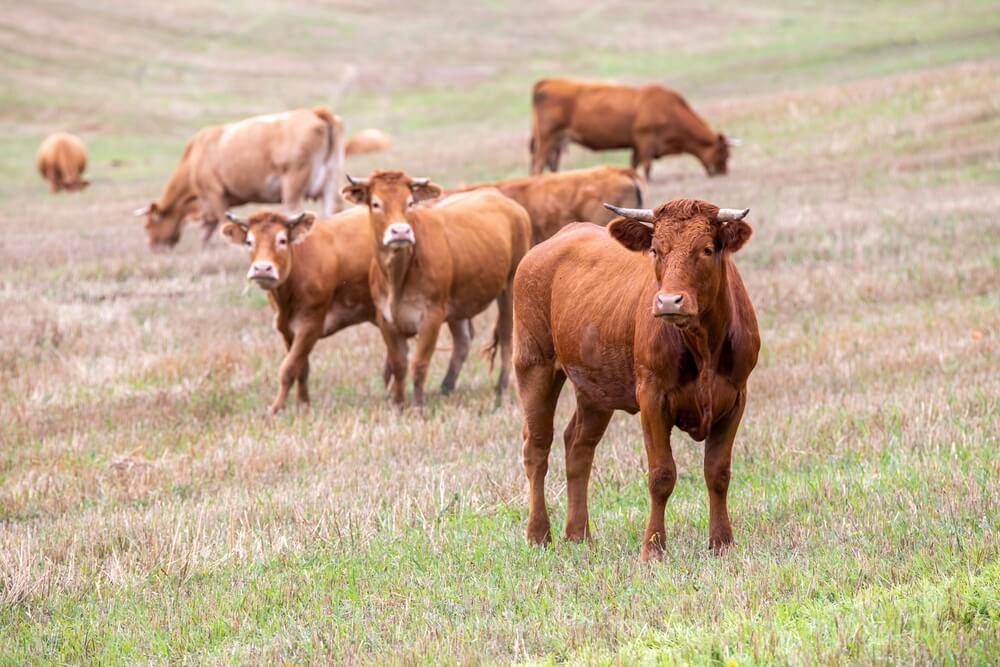 Cows and buffaloes are the two main types of domesticated bovines. Both species are used for similar purposes, either for the production of milk and meat or for work.

However, there are important differences between the two.

Buffaloes produce fattier milk but leaner meat than cows. High-quality beef is typically marbled with yellow fat, whereas buffalo fat is milky white. Buffaloes are larger and heavier than most cows. Another essential difference is the number of breeds. There are over 800 cattle breeds out there, but only eight domestic buffalo types.

The table below shows a quick list of differences between cows and buffaloes*:

*For comparison purposes, we considered the size and weight characteristic of White Chianina, which is the largest cattle breed in the world. Buffalo data refers to the Bubalus bubalis species, which is the only domesticated buffalo type. This buffalo type also exists in the wild, alongside other buffalo types.

9 Main Differences Between Cows And Buffaloes

Cows and buffaloes belong to the same family, Bovidae. Both are even-toed ungulates, but each has its own genus.

Cattle, including cows and bulls, belong to the Bos genus that comprises true cattle and oxen. In fact, cows and bulls are the same species, Bos taurus.

The difference between them is the sex of the animal – males are called bulls, whereas cow is a term that refers to adult females who have given birth at least once. Adult cows that have not yet given birth are called heifers.

Domestic buffaloes are part of the Bubalus genus that comprises different species of water buffaloes. The actual domesticated buffaloes only belong to the Bubalus bubalis species.

Defining the natural range of cattle is often challenging, mainly because all cattle are domestic animals and can be raised anywhere around the world. However, when tracking them down to their extinct ancestor, we find that cows have Eurasian origin.

All rustic and modern cattle breeds, in fact, have a common ancestor: the auroch (Bos primigenius).

Aurochs were once widespread across Europe, Asia, the Indian subcontinent, and northern Africa.

Based on DNA differences, it was established that there were three main auroch types: Eurasian, Indian, and African aurochs.

Slight variations between these species explain the visual differences between cattle types from different parts of the world and, above all, between European and Indian or African breeds.

While scientists now focus on the re-establishment and reintroduction of wild aurochs in Europe, the original auroch species was hunted to extinction, and it hasn’t been around for at least five centuries.

As their name suggests, water buffaloes typically live in the proximity of water. They can be found in wet areas near rivers, swamps, tropical forests, and wet grasslands.

Depending on the breed, cows can be found in most habitats, from wet lowlands to mountainous areas.

The main difference between cows and buffaloes is that cattle have been selectively bred for either milk, beef, or work for centuries.

Due to this selective breeding, there are now over 800 cow types around the world.

All of them come in one or two of three main colors: brown, black, and white. Actual colors can vary from uniform milky white to jet black, including fawn, cream, red, chestnut brown, dark brown, and grey.

Piebald colors are also common, typically a combination of brown or black and white.

A characteristic of some cattle breeds, especially those of Indian or African origin, is a gradual shading and blending of light to dark colors, typically from white or light grey to black. However, brown and black shading patterns are also common.

Water buffaloes are divided into two types, only one of which is fully domesticated and divided into eight recognized breeds.

River buffaloes, which are the most widespread and fully domesticated, are characterized by uniform coat color, typically black or grey. However, a spotted breed exists in Indonesia.

Swamp buffaloes, which are less common and under domestication, are white or grey.

Hybrid buffaloes born from the cross-breeding of river and swamp types can be fawn brown or grayish brown in color. 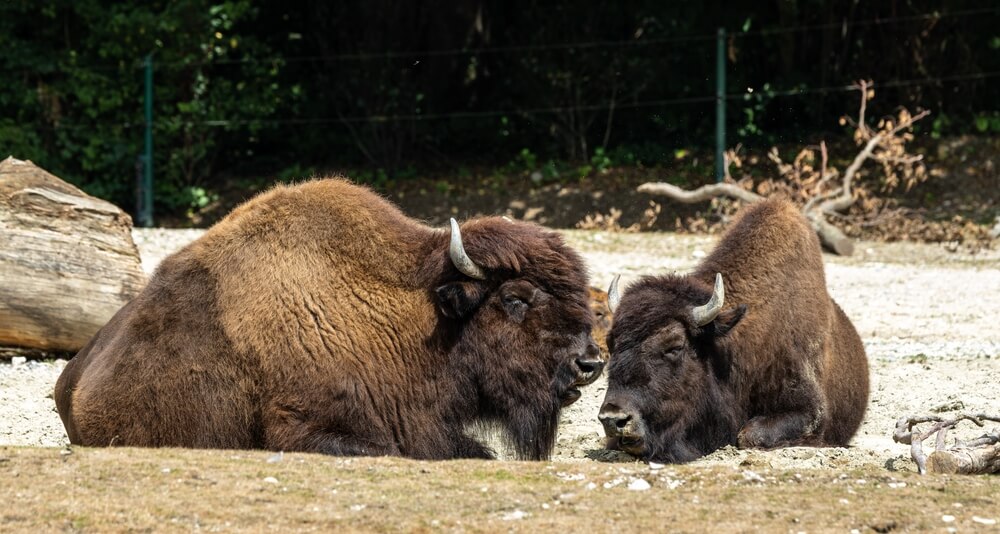 An easy way to tell between cows and buffaloes – besides coat color and patterns – is by looking at the animal’s size.

Meanwhile, the largest cattle in the world – White Chianina – usually reach a height of just under six feet. All other breeds are smaller.

In both cattle and buffaloes, males are larger than females.

Since buffaloes are larger than cows, it doesn’t come as a surprise that they are also heavier.

In fact, an adult buffalo can weigh up to 2,600 pounds. Meanwhile, a White Chianina bull rarely exceeds 2,200 pounds – although exceptions do occur, with the heaviest Chianina bull in history weighing almost 4,000 lbs.

However, these exceptions are rare, and as a general rule, cattle are lighter than buffaloes.

Size aside, the length (and shape) of the horns can also help differentiate between buffaloes and cows.

As it happens with the size, buffaloes generally have longer horns, too. Typically, buffalo horns are crescent-shaped and curled upwards. Their length, from the head to the tip of the horn, is close to five feet long or even longer.

The total horn length, from tip to tip, often exceeds 12 feet. Even if not a domestic variety, the longest horns in the world belong to a wild water buffalo and measure 13.10 feet. Female water buffaloes have similarly shaped but shorter horns.

In cattle, Texas Longhorns hold supremacy. However, the longest horn in cows is about three feet shorter than those of buffaloes: 10 feet and 7.4 inches.

It should also be said that not all cattle breeds have horns. Polled cattle are naturally hornless, whereas, in some breeds, only the bulls are horned.

Both cattle and buffaloes are polygamous animals that mate once a year or once every two years, respectively.

Cows typically breed once a year, their gestation period being similar to that of humans – around 275 days or nine months.

Buffaloes have a longer gestation period, between 300 and 340 days. Hence, they typically breed once every two years.

Both species typically give birth to one or two calves.

Cows don’t have a specific breeding season; however, farmers typically keep bulls and cows separated, so mating or impregnation only occurs at predetermined times. When raised semi-feral, cattle can give birth throughout the year.

Wild or semi-feral buffaloes usually breed between October and November. In warmer climates, breeding can occur throughout the year. In controlled herds, farmers usually time breeding or schedule artificial impregnations.

Cows are generally docile creatures with good mothering instincts. Herds are usually structured according to a dominance hierarchy, with calves adopting their mothers’ status in the hierarchy.

Bulls tend to be more aggressive towards people and other animals alike. However, they rarely become dangerous.

Deaths caused by cows do happen, however. According to statistics, cattle kill around 22 people a year in the US alone – more casualties than those caused by wolves.

Like cattle, the majority of domestic buffaloes have docile, placid temperaments. However, they can easily become more dangerous than cows.

While there are no statistics – probably because there are fewer buffalo than cattle herds – casualties happen relatively frequently.

Cows and buffaloes are both bred for similar purposes: milk, meat, or work.

Most cattle breeds are specialized in one of the three purposes, although dual or multipurpose breeds also exist.

Buffaloes are mostly selected for their milk rather than meat, which is leaner compared to beef. They are also excellent draft animals.

Cow Vs. Buffalo Breeding: Which Is Right For You?

Farmers aiming to select the best species should consider the type of animal they need.

Draft animals are rarely used nowadays, most farms using modern equipment for working the land. Thus, you should decide whether you want to raise bovid for their milk or meat.

Richer in fat and protein, buffalo milk is a premium choice for dairy, too. It is used for the production of high-quality cream and cheese.

The table below shows the nutritional value of whole cow vs. buffalo milk:

Buffaloes don’t only have higher quality milk; their meat also has excellent quality and lower cholesterol levels compared to beef. However, the flavor is similar to a very lean beef, which is often described as bland.

High-quality beef is typically marbled (rich in fat), tender, juicy, and incredibly tasty. This is why most farmers raise cattle for their meat rather than buffaloes.

The table below compares the nutritional value of beef vs. buffalo meat: