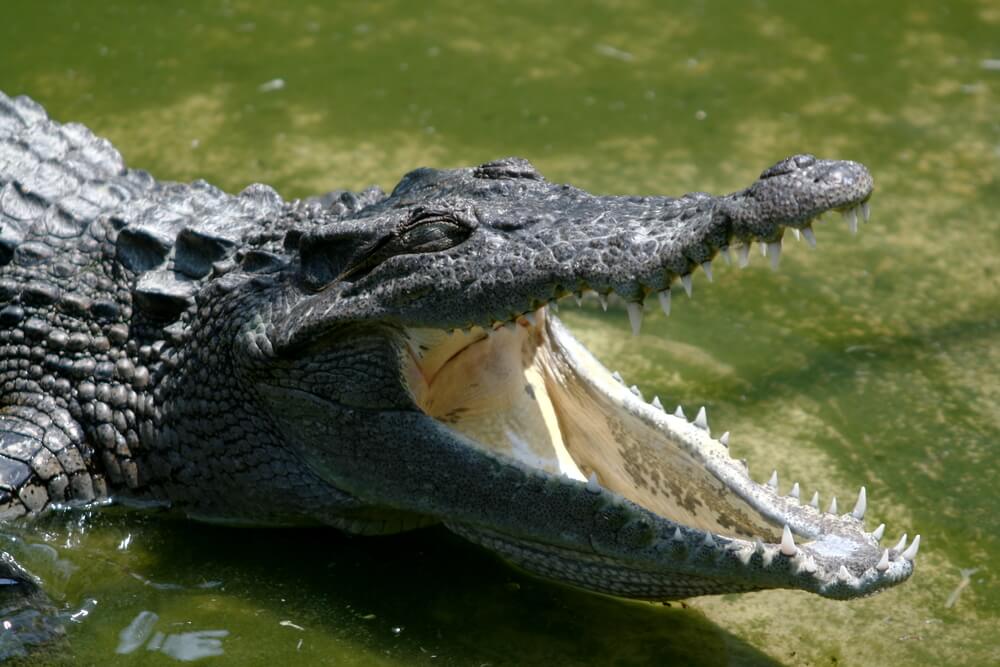 Alligators and lizards look a lot alike. This can cause confusion about whether or not they are the same animal.

Alligators are not lizards despite their many similarities. Both animals are reptiles, which gives them some commonalities such as being cold-blooded, having long bodies that walk on 4 legs, and laying eggs. However, they differ in their taxonomy classifications, species, anatomical functions, behaviors, habitats, and more.

This article will explain in great detail why alligators are not lizards, which conversely shows that lizards are not alligators.

While alligators and lizards have similar characteristics, especially at first glance, they are classified as different animals. An alligator is not a lizard.

This table briefly outlines these similarities and differences:

*Please note that the asterisk (*) denotes that there are some lizard species-specific exceptions.

Read on to learn in more detail about the similarities and differences that demonstrate that alligators are not lizards.

Lizards and alligators have many similarities, which often leads to confusion about whether or not alligators are lizards.

The following are commonalities between these two creatures.

Alligators and lizards belong to the Reptilia which are reptiles that include lizards, snakes, turtles, crocodiles, and alligators.

Most reptiles have the following characteristics.

Since these creatures are in the same class of taxonomy, they have similar anatomy and physiology.

These similarities include the following:

Lizards and alligators alike tend to socialize with their own species. Some species of lizards will tolerate turtles and snakes, but many others will fight with them.

Lizards and alligators are also territorial over their habitats, defending them to maintain dominance. They will also fight for mating rights.

Both animals will spend time on land, other than a few species of lizards that are water-dwelling, such as the marine iguana (Amblyrhynchus cristatus) or water dragon (Physignathus cocincinus).

Many lizards live on the ground or in trees for all functions of their life. Alligators come primarily onto land for feeding and hunting.

Alligators and most lizards are carnivorous.

They feed on prey or animal matter as their source of nutrition.

Lizards and alligators mate with cloacas. This is a chamber and outlet found in reptiles, amphibians, many bird species, and sharks for the act of breeding, but is not found in placental mammals.

The male fertilizes the female’s eggs internally, and then the eggs are laid for hatching. Some lizard species are an exception and give live birth after internal fertilization.

Alligators and lizards can run and climb. They also walk (except for legless lizards) and burrow.

Some lizards will burrow just underneath the surface of the land, leaving their eyes and nostrils above the surface. Alligators burrow muddy, water-filled holes in banks.

These creatures burrow for thermoregulation and protection in cold or hot extremes.

These, however, are not alligators at all.

To further explore why alligators are not lizards, it is essential to take note of their vast differences.

While lizards and alligators are both in the class of Reptilia, they are in different taxonomic orders.

Lizards are in the order Squamata and suborder Lacertilia.

Alligators are in the Crocodylia order and family of Alligatoridae.

Despite their differences in size, alligators and lizards may look similar. However, upon closer examination, their bodies function in different and various ways.

Alligators are primarily in camouflage colors of gray, green, and brown with a lighter underbelly.

Conversely, lizards come in a vast number of colors, variegated shading, and patterns. Some can even change color and patterns to camouflage with their surroundings.

Mature alligators grow up to 6 feet in length or longer.

Lizards mature to grow at different lengths based on their species, which ranges from about ½-inch such as in the Dwarf gecko (Sphaerodactylus parthenopion) to 10 feet such as in the Komodo dragon (Varanus komodoensis).

Like mammals, alligators have thecodont teeth which are teeth that are enclosed in deep bone sockets. Alligators, in particular, can regrow lost teeth up to 50 times.

Pleurodont teeth have long, yet weakly attached roots in the mandible without a socket. They regrow and are replaced throughout the life of a lizard.

Acrodont teeth are fused directly to the jaw without sockets. These teeth do not regrow if they are broken off.

Alligators have stable, fixed tongues that cannot flick out.

Lizards, on the other hand, can flick out their tongues, much like a snake does.

Both lizards and alligators have eyes on top of their heads, allowing them to submerge themselves and still see their surroundings.

However, many lizards have a third parietal “eye” that has a rudimentary retina, cornea, and lens.

In most lizard species, it appears as a tiny, pinhole-sized spot between the other two eyes. This photoreceptive spot works with the pineal gland for circadian rhythms, hormone production, and thermoregulation.

These lizards are not considered snakes since they have other lizard features such as moveable eyelids and inflexible jaws.

Alligators have dermal-connected, hard, and bony scutes that overlap as protective scales, whereas lizards have epidermal scales on their outer layer of skin.

Lizards are also able to regrow a decapitated or injured tail, and alligators cannot.

While both animals are diurnal (active during the day), alligators are also active at night.

Alligators are intelligent and aggressive apex predators by nature and will attack individually and collaboratively to capture prey or for defense.

They have powerful and lethal bite forces that can kill in one bite, and even use tools such as sticks to draw in prey, such as birds.

Lizards on the other hand tend to be docile or skittish and not all are considered apex predators.

An exception is the komodo dragon who is an apex predator eating carcasses and mammals. It will also hunt water buffalo.

However, smaller lizards are preyed upon by leopards, wolves, wild dogs, crocodiles, fish, and more.

Many smaller lizards can be kept as pets, whereas it is illegal to own an alligator in many states.

Alligators are semi-aquatic reptiles that live and thrive near freshwater sources. They are only found in the United States and China.

Lizards are primarily terrestrial, except for marine iguanas which live in the ocean.

They are found on every continent except for Antarctica, capable of living in any kind of land habitat that is not in extreme cold.  Lizards can be found in the ground, rainforests, rocky areas, marshes, trees, or burrows.

Alligators are carnivorous and opportunistic hunters. They will lie in wait, and then jump, pounce, and leap to take down an animal. They eat invertebrates and vertebrates such as amphibians and small mammals.

Lizards eat a variety of smaller creatures (except for the Komodo dragon). These include insects, grubs, and larvae.

Some lizard species are herbivores or omnivores, adding vegetables and leafy greens to their diets.

Alligators reproduce and lay a clutch of eggs once a year. Whereas lizards will breed and lay 2 or more clutches of eggs each season.

Some lizard species, such as the viviparous, or common, lizard (Zootoca vivipara) give birth to live lizards.

For more information about how alligators and lizards reproduce, see the similarities section above.

While both lizards and alligators can walk, most lizards cannot swim as alligators do.

Also, alligators can raise their bellies to do a highwalk, which allows them to walk faster and conserve energy. Alligators use their tails to jump straight out of the water or propel themselves with power for lunging or climbing.

Lizards primarily use their tails for balance, social status (tailless are less likely to mate), and to store body fat.

Depending upon the species, some lizards can run on two legs, cling to surfaces, slither, or glide.

Alligators are not amphibians. Amphibians include animals such as frogs, salamanders, toads, and newts.

Amphibians have characteristics such as the following:

Alligators do not have smooth slimy skin to absorb oxygen nor do they have larval stages in their life cycle.

What Did Alligators Evolve From?

Alligators, crocodiles, and other crocodilians have evolved from a group of reptiles called archosaur pseudosuchians, which includes diverse apex predatory reptiles, from 235 million years ago.

It is thought that these reptiles were present during some of the same times as dinosaurs.

Alligators are not dinosaurs.

Since they are classified as archosaurs, they are grouped with dinosaurs and birds from long ago. However, dinosaurs were primarily land-dwelling creatures and not semi-aquatic like alligators.

Dinosaurs and alligators are both reptiles and have many common traits but even then, they are not the same creature.

Even though lizards and alligators seem closely related, they are not the same. Alligators are also not amphibians or dinosaurs.

While these creatures are all cold-blooded reptiles, alligators exist as only two species within the Crocodilia taxonomic order.

Alligators use their tails for defense, jumping, and power, and are apex and aggressive predators.

They are semi-aquatic creatures that spend much time in and near water.

These key differences in comparison to lizards make it clear that they are not the same.