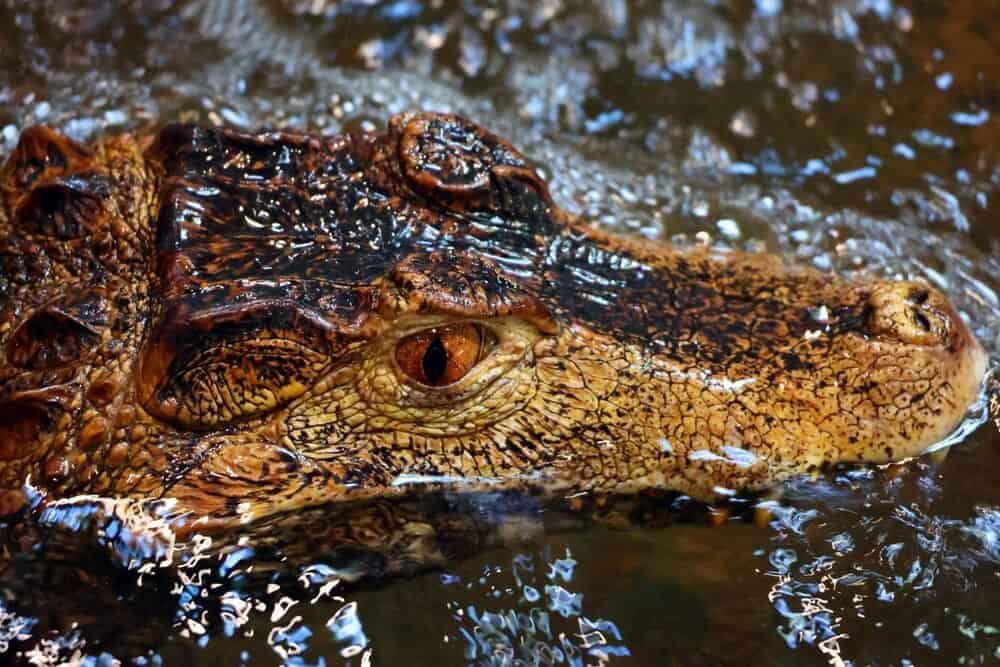 Alligators can jump out of the water, on land, and out of trees. The height and distance to power jumps vary. They can jump up to 6 feet vertically straight out of the water, and lunge several feet horizontally on land. Alligators use their tails and powerful musculature to propel themselves up and forwards.

Alligators have multiple ways of moving to capture prey and navigate their habitats.

This article will go on to further explain why and how alligators jump as well as factors and statistics about their abilities.

Alligators belong to the Crocodilia order, and the family Alligatoridae. Alligators can be found moving in swamps, wetlands, and rivers.

Much like their cousin crocodiles, alligators jump, leap, and lunge for the following reasons:

Alligators can jump both in and out of the water (more on that below). Keep in mind that alligators most often perform jumping, leaping, and lunging motions that propel them forward horizontally, rather than upward most of the time.

This is because they are typically targeting something within range.

If they jump vertically, it is to obtain something overhead such as tree-dwelling mammals or birds. Vertical jumping can occur when leaping from an overhanging tree branch down into the water as well.

How Do Alligators Jump?

If the alligator is fighting or catching prey, they use their powerful jaws to bite as they lunge. An alligator’s bite force is over 2,000 pounds per square inch, making them a deadly threat with the ability to kill on the first bite.

They have binocular vision, which allows them to see around obstacles and with sensitivity to contrast in their field of vision to estimate distances.

An adult alligator’s tail is proportional, about 60% to 70% of its body length.

Once a target is obtained, the alligator will move its tail in a wave-like motion (sinusoidal undulations) to push itself upwards out of the water, much like an explosion. The alligator flexes its neck and body to further power its motion.

If the alligator’s legs are touching the substrate or something it can leverage off of, it will also use its legs to spring it forward. This allows the alligator to jump or lunge at a faster speed and higher height.

This video shows a crocodilian reptile jumping and undulating its tail to leap vertically out of the water:

How High Can An Alligator Jump?

The height of an alligator’s jump is largely based on observational data.

Depending on factors related to where the alligator is jumping from and the physical characteristics of an individual alligator, it can jump vertically up 5 to 6 feet out of the water.

On land, alligators can jump up a few feet but tend to lunge horizontally towards prey. They typically cannot go as far or as high, since they are not undulating their tails in the water for propulsion.

Where Do They Jump?

Alligators can jump over and on different kinds of surfaces, including water, land, fences, boats, and trees.

The following table provides more information about these:

6 Factors That Affect How An Alligator Jumps

Several factors come into play on how high or far an alligator can jump.

Read on to learn more about these in detail.

Smaller and lightweight alligators generally can jump higher since they weigh less. Larger alligators have more muscle mass and weight.

Small and young alligators can leap more easily vertically due to their size to catch small prey such as insects, small birds, or flying mammals, such as flying fox bats (Pteropus).

If an alligator can undulate its tail in water or push off of a surface it can jump or lunge higher and farther.

In captivity, alligators can push off of walls to propel themselves further.

The angle that an alligator jumps at affects how high or far it goes.

A shallow or small angle of a jump will not go as high but could go farther if it can push off of something.

Deeper water allows an alligator to fully undulate its tail, propelling it up higher at a perpendicular angle.

Aging affects an alligator’s ability to generate power and jump as high as it did in its youth.

Species will vary in their length of legs and body shape. Muscular and structural factors affect jumping abilities.

Alligators are smart. They use tools, collective hinting, and observe patterns to make hunting plans.

The element of surprise paired with jumping can give alligators needed .

Alligator Jumping Vs. Other Animals

The information below compares alligator jumping abilities with humans, kangaroos, and dogs.

The Guinness World Records states the highest human standing jump at 7 feet in 1989. Generally, humans can jump from a standing position up to approximately 5 feet.

People use their arms and legs to propel motion and use power. Humans also have bones and muscles designed for coordinated movement in flexible ways.

Even though alligators can also jump 5 to 6 feet, their jumping can be more powerful in bursts of movement. This is because they use their tails and have a better center of gravity for balance.

Kangaroos jump in a bouncing manner, whereas an alligator is propelling itself forward or up.

Kangaroos can leap in one bound over 25 feet and at over 6 feet high. Kangaroos use their tails or balance as they hop and can move at speeds up to 35 miles per hour.

This makes kangaroos much farther and faster jumpers than alligators.

Dogs tend to leap or jump horizontally rather than from a standing position. Their front legs thrust them forward and their back legs add propulsion.

The height and distance a dog can jump depend upon its species and size. Typically, they can jump 1 to 3 times their height. Healthier and fit dogs can jump farther than aging or ill ones.

Alligators seem to have an advantage when it comes to dogs. Often dogs are victims as prey to alligators.  Alligators rely on the element of surprise and attack as they lunge toward a dog.

Alligators have a range of movements in addition to jumping.

These movements allow an alligator to navigate water and land, gain dominance, thermoregulate, or catch prey.

They typically use their tails to push themselves up and grab a textured surface with claws and powerful musculature.

They then move at a somewhat horizontal angle to sit on an extending branch up to 6 feet high.

Since alligators spend much time in the water, they are effective swimmers. They can swim quietly, only exposing the top of their snouts at the surface.

They use the water to hold and submerse caught prey as they attack it.

Alligators can swim up to 20 miles per hour and hold their breath for up to 2 hours when resting underneath the water’s surface.

To move on land, an alligator will move in a walk in a highwalk fashion. Highwalking is done on all four legs, with the belly and tail lifted off of the ground.

This allows them to walk faster while using less energy.

Highwalking is at a strolling pace for alligators, but it can transition into a run.

Alligators also move in belly crawls, dragging their bellies and tails along the ground as it moves forward.

Generally, they do this for thermoregulation, nesting, and socializing, and not when pursuing prey or defending territory.

While not the first mode of movement, alligators can stand. They use their hind legs and tails for balance.

Standing is often done in conjunction with climbing.

Alligators are powerful jumpers, capable of overpowering and outjumping other creatures.

They are capable of jumping out of the water, on land, into boats, over fences, out of trees, and onto water banks.

Often jumping is used with an element of surprise and a powerful bite force to capture prey.

Their powerful tails undulate underwater to propel them, and on land their powerful musculature and legs allow them to lunge and leap.