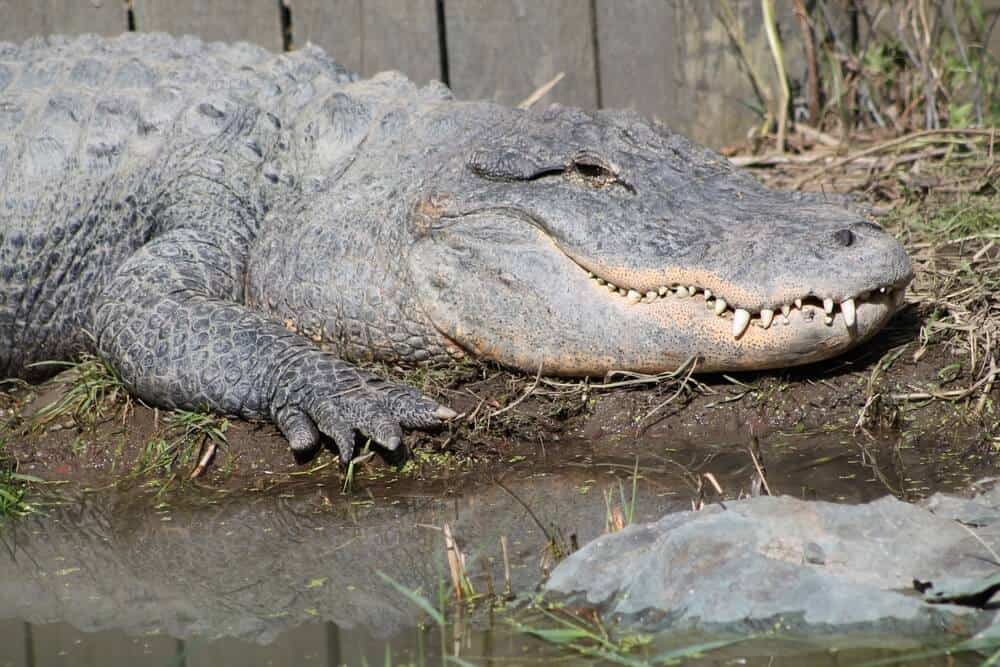 Alligators can be terrifying creatures and are portrayed as such in documentaries and movies. Yet, some people have miniature alligators as pets.

Alligators are smart as compared to several other animals. They have the ability to work in groups and use tools to hunt, recognize and remember patterns, communicate in various ways, and care for their young for extended periods. Their intelligence does not indicate however that they are tameable. Caution and risk are involved when it comes to interacting with alligators.

This article goes on to further explain how alligators are smart, as well as how their intelligence is compared to crocodiles, dogs, and humans.

Read on to also learn more about whether or not alligators can be tamed or show emotion.

How Are Alligators Smart? (5 Signs Of Intelligence)

Alligators show that they are intelligent in a variety of ways.

These signs of intelligence are evidenced through their hunting, communication, and parenting skills along with the ability to change behaviors in response to patterns.

A limited number of species of animals (humans included), coordinate actions and take on roles in hunting. Crocodilian species have been observed doing that, demonstrating intelligence.

Alligators collaboratively hunt in groups, working together to pursue and capture prey.

Additionally, alligators have keen hearing, smell, and integumentary sense organs (ISOs). These ISOs are found on the scales, and allow the alligator to detect pressure changes in the water and nearby prey.

Examples of collective hunting in social structures include the following:

Alligators have the ability to create and act on plans, showing a capacity for problem-solving.

Alligators have also been observed using tools to help them hunt unsuspecting prey, often in or near water.

During migratory or nesting bird seasons, alligators will float motionless in water with small piles or bits of wooden sticks on their snouts and crowns.

When birds, such as egrets (Ardea alba) swoop down to collect the wood, alligators snatch them up.

This clever use of using sticks as a tool to capture prey demonstrates alligators’ ability to learn to use other objects to obtain .

Other alligators have learned how to climb over chain-link fences (and trees) rather than taking a long way around. The fence is a tool to speed up their access to the other side.

While caring for the young is instinctual for many animals, the alligator mother shows her intelligence by the way she cares for her young.

The length of time she cares for the hatchlings can vary, showing that a parent adapts to the needs of their offspring. This advanced parental care contributes to better survival rates.

The female alligator nests on shore and guards her eggs. Offspring will chirp while inside the eggs, and the mother responds to them, to synchronize hatching.

When the offspring hatches, she carries them in her mouth to the water. The female continues to protect them from predators such as raccoons and other alligators for as long as two years.

The calls and body language of an alligator are multimodal, and nuanced, demonstrating that they use complex ways to communicate.

Sounds travel well through water, and alligators’ acute hearing and ISOs are used to communicate in a variety of ways.

Examples of alligator communication include the following:

In the wild, alligators learn about the ocean currents for migratory purposes, adjusting their behavior.

Also, is a motivator for alligators, and if they learn that is available at certain times of the day they will adjust their hunting behavior to obtain the .

For example, they may notice when animals habitually drink from the water during the mornings.

In captivity, a trainer that works with alligators noticed that one of them recognized an involuntary muscle twitch from him before he would offer .

This same trainer also learned that this alligator figured out how to lift a grate from her exhibit to escape.

Alligator Intelligence Vs. Other Animals

Here we will compare the cleverness of alligators versus other animals. 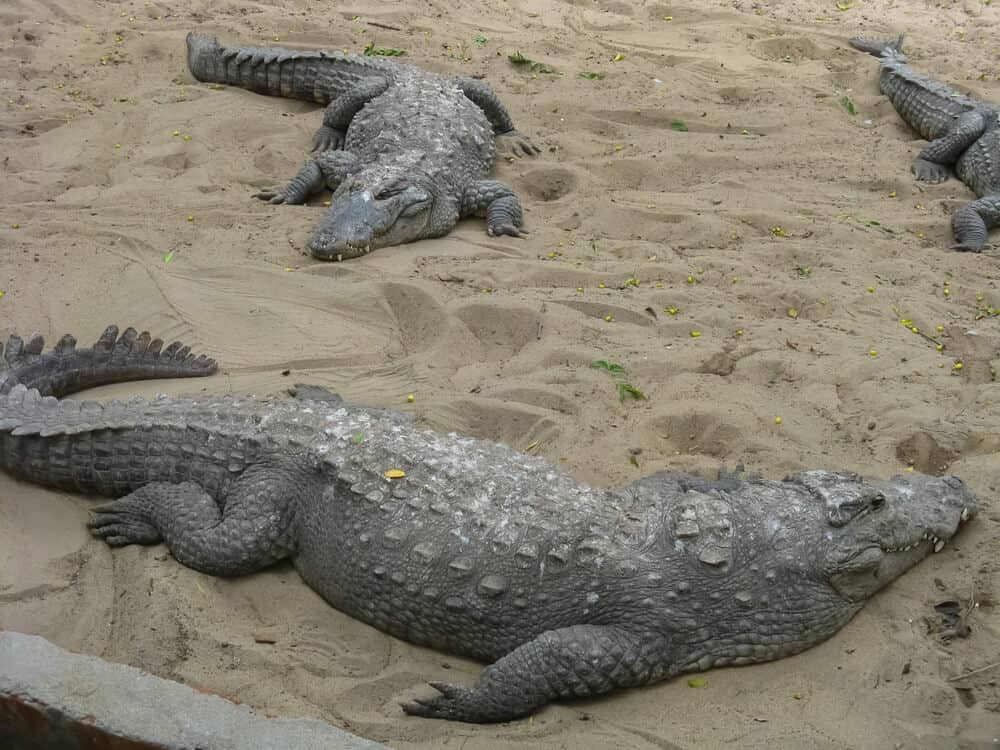 While their snout shapes, temperaments, and overall sizes may be different, crocodiles tend to show the same intelligent behaviors as alligators.

Alligators are smarter than sharks.

Sharks are primarily instinct-driven, responding to the environment in predictable ways.

For example, they do not differentiate between a surfboard or a seal, thinking the underbelly of the board is prey. Sharks will inflict a bite or attack to taste it to see what it is.

Whereas alligators learn patterns and change or modify behavior over time to obtain , learn what is available, maneuver obstacles, and so on. 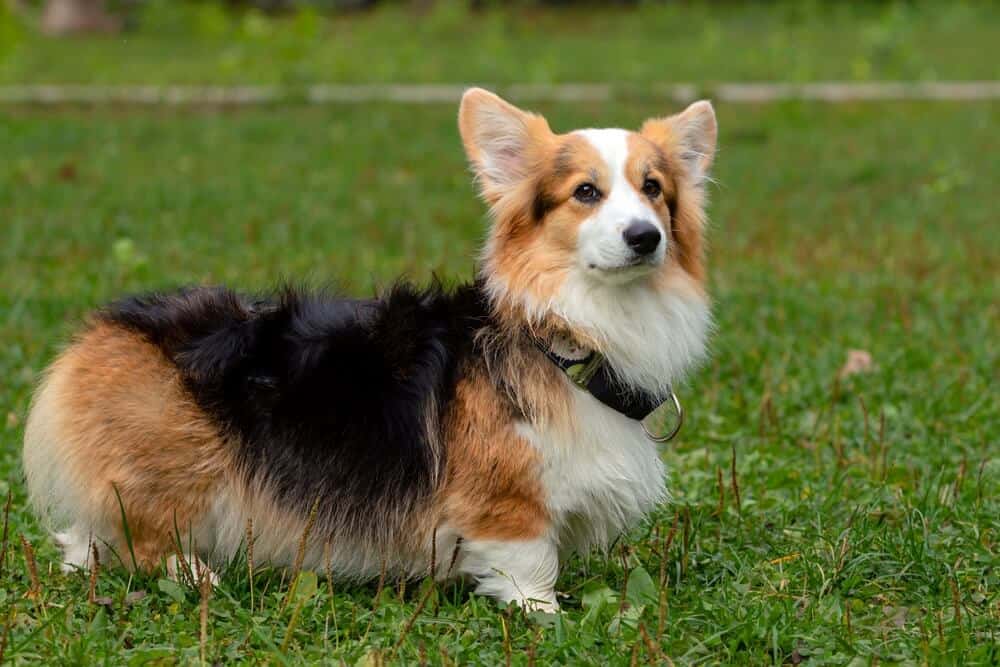 Dogs can be trained to listen to commands from a human, as well as learn patterns and expected behaviors.

Alligators do this naturally by learning through their environment, and typically without human intervention.

Alligators will eat a dog if they can get close enough. A dog may bark at an alligator to try to scare it away, but ultimately the alligator’s powerful bite force (over 2,000 pounds per square inch), jaws, and lunging body will overtake it.

It is best not to have a battle of wits between a dog and alligator, since the dog will likely be injured or killed.

A human has a large brain weighing from 1,100 to 1,400 grams. Whereas an alligator’s brain is about 8 grams. More importantly, the function of the brain determines intelligence.

Humans are the most intelligent animals on earth with the ability to perform higher-thinking cognitive abilities and problem-solving.

However, despite an alligator’s intelligence in pattern recognition and problem-solving, they are not as smart as humans because they cannot perform human-minded (higher-thinking) tasks.

Just because humans are smarter does not mean they can outwit an alligator and stay safe.

Trained professionals are the only ones that should interact with alligators, and even then it comes with a great risk of physical injury or death.

Can Alligators Bond With Humans?

The reptilian brain shows some commonalities with human brains.

However, alligators are not friendly. They may give an impression of bonding with humans because they have learned that you offer a source.

In the wild, alligators eat once a week or less, storing excessive calories that can last over two years in times of scarcity.

A docile alligator may not be hungry and therefore could pose less of a risk.

So, if an alligator is not threatening to a human, it is likely because they have learned about the environment in such a way that it seems like they have formed a bond. Lower threat or lack of aggression does not mean bonding has taken place.

Keep in mind that alligators are risky at all times, and their “feelings” towards a human can change, especially if they are hungry. They will bite a hand that feeds them.

Do Alligators Have Emotions?

Alligators do not have emotions.

The alligator’s limbic system and medulla oblongata in the brain control their drive to act aggressively. While this may seem like they are angry or ill-tempered, it is not emotion.

These parts of their brains “program” alligators to instinctively survive by showing dominance in territorial or mating situations or to obtain .

Can Alligators Be Tamed?

An alligator can learn patterns of behavior such as when a person brings them . They possibly can learn tricks, but again, this is based on clues that the environment gives them paired with a reward or consequence.

Even experienced professionals that work with alligators know there is risk and unpredictability with any alligator, even if they have worked with it for many years.

Tiny pet alligators may seem tamed when you handle them and are less likely to cause lethal injury. However, they still can bite and act unpredictably, even with lots of handling.

Alligators are smarter than other animals and develop behaviors to demonstrate this.

They work together to corral and hunt prey, and use tools such as sticks to lure in birds. They can learn and store patterns in their memory for hunting tactics and migration.

Alligators are effective communicators, talking to their young while they are inside their eggs, creating a range of vocalizations, and using body language.

They also take care of their young, protecting them for extended periods to ensure their survival.

Alligators are dangerous and intelligent creatures, capable of learning in novel environments.

Even trained professionals must exercise caution at all times around alligators both in the wild and in captivity.