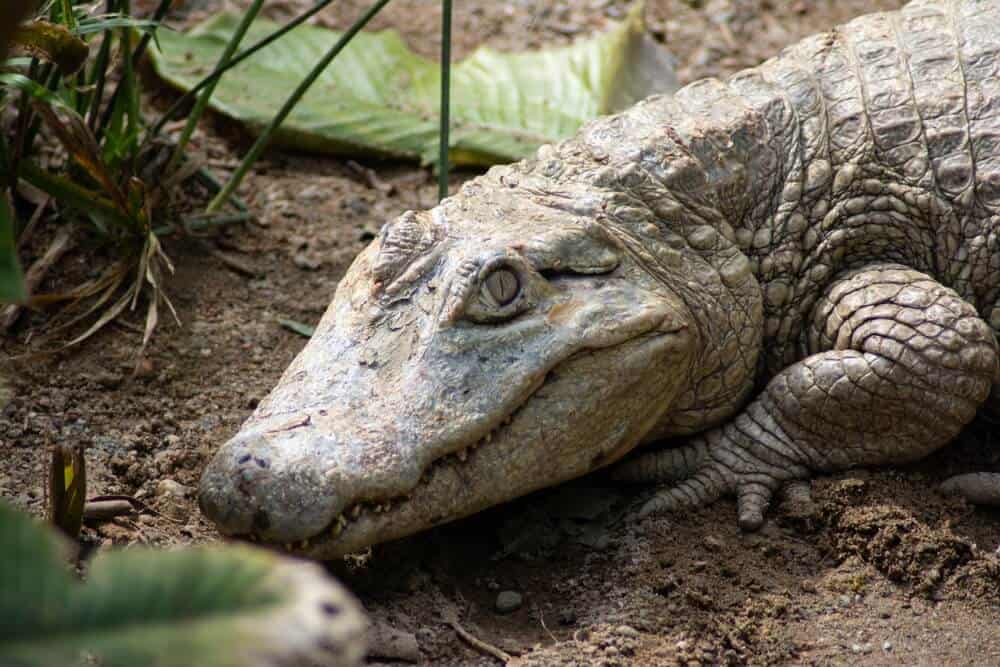 Alligators cannot be tamed, domesticated, or trained like a dog. They are instinctive hunters that don’t socialize or bond with other species of animals, including humans. A captive or pet alligator is risky for humans since they can recognize that a source is readily available. If an alligator is hungry or exhibiting predatory behaviors, they are dangerous and unpredictable, even in captivity.

Alligators are apex predators, floating near the surface of the water, waiting for an opportunity to attack.

Alligators are nuisances in many residential areas, posing lethal threats to homeowners, their families, and their pets.

Why Alligators Cannot Be Tamed or Domesticated: 3 Reasons

According to the dictionary, “tamed” means that a wild animal is easily handled, useful, docile, submissive, and domesticated.

Alligators simply cannot become domesticated or tamed in a submissive way towards humans.

Even alligators that have daily exposure to people retain their natural instincts, largely driven by predatory behaviors in seeking .

Alligators show higher intelligence as compared to other animals through collective hunting and the use of tools to capture prey.

They care for their young for extended periods and can learn and recognize patterns to guide their behavior. Additionally, they use complex communication vocally and through body language when interacting with each other.

However, even though alligators have demonstrated higher levels of intelligence, this does not mean that they will become tamed or domesticated.

Alligators are driven in large by their need for dominance and sources, and their intelligence is used to support those needs.

Alligators congregate socially, but with their own kind. They stick together for collaborative hunting, and hatchlings tend to stay together as well.

Since alligators prefer their own kind and even then, will attack each other, they cannot connect to people socially.

People who own small pet alligators may be able to handle and hold them. Alligators may recognize that people offer a source. However, there is always risk involved with alligators since they are primarily driven.

Baby or pet alligators do not imprint on humans. They do not have emotions that allow them to bond.

An alligator’s brain function is designed to make alligators act aggressively, making them appear angry. However, this anger is not an emotional reaction. Rather, it is the way an alligator is “programmed’ to survive.

Professionals that work with wild and captive alligators understand that there is always a risk when interacting. Alligators’ innate need for hunting and dominance drives their behaviors.

Alligators’ bite force and lethal attacks make them very dangerous. They have a bite force of over 2,000 pounds per square inch. Alligator attacks are 3 times more deadly than those of sharks.

Captive alligators do not get enough enrichment and can become bored, which then leads to frustration and increased aggression. 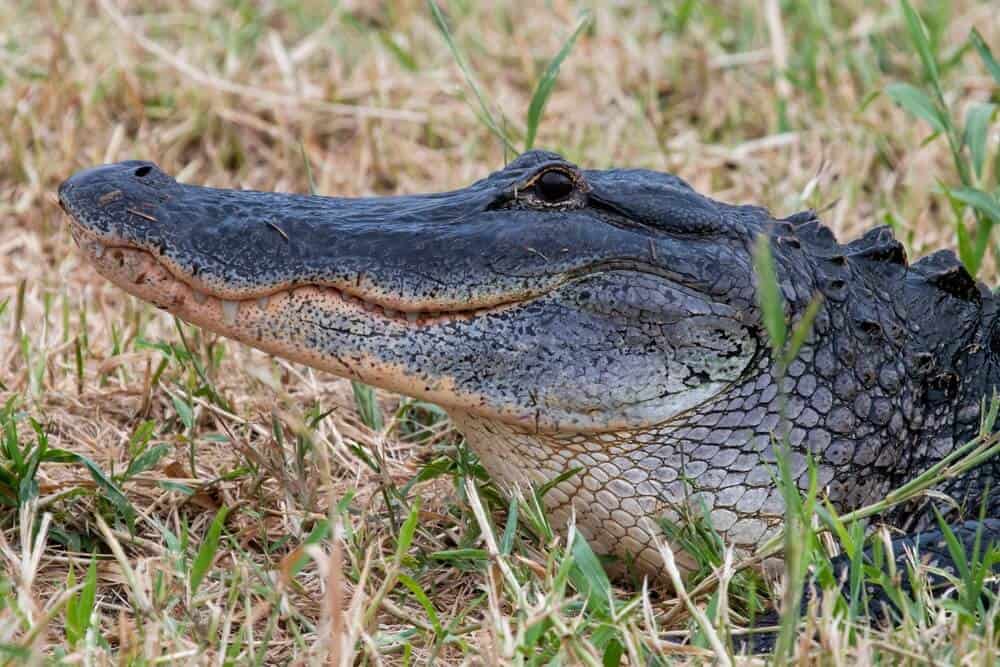 Alligators should not become pets, and in many states, it is illegal to own one.

Even though hatchlings may be cute, as mentioned above, alligators cannot bond with their humans or become domesticated.

Alligators grow 2 to 12 inches yearly until they reach maturity.

The American alligator (Alligator mississippiensis), for example, can grow to be over 12 feet long and weigh up to 1,000 pounds.

An animal of this size also needs a living area (with water) to accommodate it, so a tank used with a baby alligator is not going to be sufficient.

Alligators are diurnal and nocturnal, meaning they can be active during both the day and night. They also need a large enough body of water so that they can swim back and forth.

Alligators need enough land area to thermoregulate since they are cold-blooded reptiles.

In areas with cold temperatures, they need additional shelter and warmth to survive.

UV lights may be necessary to give alligators the ability to perform necessary physiological processes.

A growing alligator also needs enough to sustain its size.

A captive alligator needs sources like it does in the wild, consuming a variety of meat sources (fish, birds, mammals, turtles, and so on).

If an alligator is lacking in varied nutrition, it can develop disorders such as metabolic bone disease and other illnesses or conditions.

A hungry alligator is also more aggressive and can attack what they see as sources such as children and pets.

Everything an alligator needs for its care costs money. From its living space, nutrition, and exotic care from a veterinarian, the expenses add up.

In captivity, an alligator can live 65 to 80 years. This means that an alligator is likely to outlive its owner, leaving its care to someone else, a zoo, or a wildlife refuge.

Funds should be responsibly managed for the lifespan of an alligator.

Even though alligators in captivity learn patterns about people and their interactions with them, there is always a risk of attack.

Trained gator keepers have special permits and qualifications for handling these dangerous creatures. Professionals use precautions every time and do not let their guard down around alligators they have been working with for years.

Alligators are apex predators with powerful muscles, and incredible bite forces, and can roll, thrash, and spin quickly to take down prey.

As mentioned above, captive alligators can become increasingly aggressive. If an alligator can overpower a human for dominance or , it will instinctively behave in this way.

Alligators cannot be trained like dogs. Dogs and alligators use their intelligence in different ways.

Dogs respond to positive reinforcements and learn patterns and behaviors when working with people.

Alligators can also learn patterns through repetitive operative conditioning, which is exhibiting behavior to avoid punishment or gain reward. Even then, their instincts may take over unexpectedly.

In captivity, alligators will get used to human presence, but this can make them more dangerous if they are bored or hungry in an enclosure.

They may even learn their names given to them by a handler. However, an alligator’s strong and innate survival needs drive them to be dominant and seek .

This is different from a dog. Dogs learn to be domesticated and submissive to a pack leader, such as a human. Dogs will be socially submissive to and live with other species, whereas alligators do not.

Alligators do not have the capacity for emotions and bonding and therefore are not friendly.

Alligators see humans as a provider of or as sources, which increases risk.

They do not socialize with people by choice, and are either solitary or stick with similarly-sized alligators.

Do Alligators Recognize Their Owners?

Alligators can recognize their owners as they learn the sound of their voices and patterns of movement.

Keep in mind that even if they recognize you, an alligator sees you as a provider of and care.

Even then, this does not mean they are bonded to you, tamed, or domesticated. If they are bored, aggressive, or in distress, they can attack.

Alligators used in presentations before the public are typically well fed before they interact with humans to reduce the chances of an attack.

It is best to disassociate from people and to create a distance between the edible and people’s bodies.

People should not attempt to tame or domesticate alligators.

When they come to rely on a person for , it can create increased aggression and risk of lethal attacks.

Additionally, alligators are very expensive to care for as they increase to a tremendous size.

While intelligent hunters, alligators do not have emotional intelligence and therefore do not bond with humans or any other species.