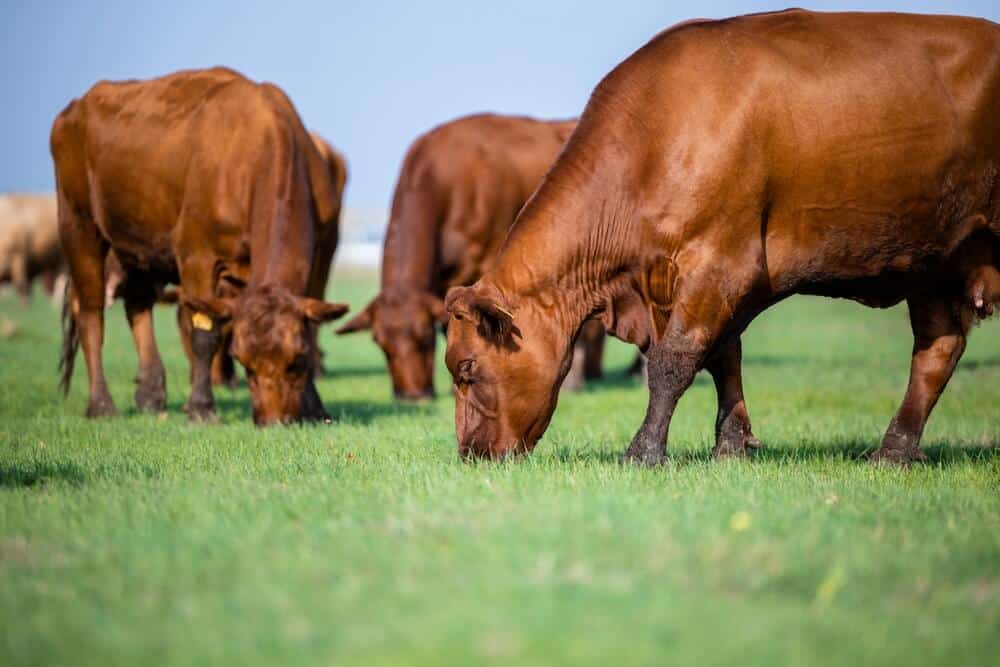 Cows are herbivores. Pasture-raised cattle feed on grasses, legume forages, and stems, eating as much as 150 pounds of herbaceous plant materials per day. However, cows can sometimes deliberately eat meat or animal products due to nutritional deficiencies. Scientists also discovered that feral cows can switch to an omnivorous diet to maintain feeding efficiency as a response to environmental changes.

While all cows are herbivores, these ruminants can sometimes supplement their diets with meat and other animal materials.

Find out why they do it and how to keep your cattle or pet cow healthy.

Are Cows Herbivores, Carnivores, Or Omnivores?

Cows are ruminant ungulates and, like all other mammals in this class, they are herbivores.

However, the term herbivore typically refers to animals whose diets are mostly based on grass and plants.

With very few exceptions, such as koalas, there are no strict herbivores among mammals. These animals commonly ingest insects while grazing or browsing, even if eating insects is accidental.

Less accidental is seeing cows, deer, and other herbivores go after live prey – but, according to observations and research, this behavior is relatively common.

For instance, one cow in India is known to deliberately eat live chicken.

This might not have been a one-off accident, as another Indian cow has reportedly eaten over 45 chickens in a month.

Red deer are also known to deliberately eat the bones of dead seabirds, even if they avoid ingesting flesh.

However, white-tailed deer, like domestic cattle, often consume quail or passerine nestlings, eggs, fish, insects, and even small mammals like rodents and rabbits.

Why Do Cows Sometimes Eat Meat?

While cows do eat meat sometimes, they are not considered omnivores.

That’s because the consumption of meat or animal materials is only deliberate when these animals suffer from nutritional deficiencies.

A study on cattle and wild ruminant meat-eating behavior shows that these herbivores go after live prey, bones, or carrion when they lack vitamins, amino acids, and minerals such as calcium, phosphorus, and sodium.

scarcity is another reason why cows might eat meat.

Again, this behavior is only observed in pasture-raised cows whose diet is not supplemented during the cool season or in feral animals living in cold climates or arid areas – perhaps this explains why cows in Goa commonly eat meat when the chilly, arid climate sets in.

Like all mammals, cows need a variety of nutrients. These nutrients include protein, which provide cattle with essential amino acids.

In nature, cattle get their protein from a variety of plants, including legumes, corn, soybeans, and oil seed crops such as oilseed rape.

However, cows that are mostly fed cattle feed may not have access to such high-quality protein sources.

Pasture-raised cows may also lack a protein source in the cool season – which is why most farmers feed their animals protein-rich cattle feed in winter.

This type of cattle may contain animal proteins.

Cattle feed manufacturers don’t explain why they use animal protein in their products; however, the reason is likely linked to manufacturing costs – animal by-products are likely cheaper than legumes or maize, since they are typically considered waste.

Animal by-products also have a high nutritional value, which means that they can be included in a lower quantity compared to legumes.

The rest of the feed can contain grasses, hay, barley, and clover or alfalfa.

Why Are Cows Considered Herbivores? 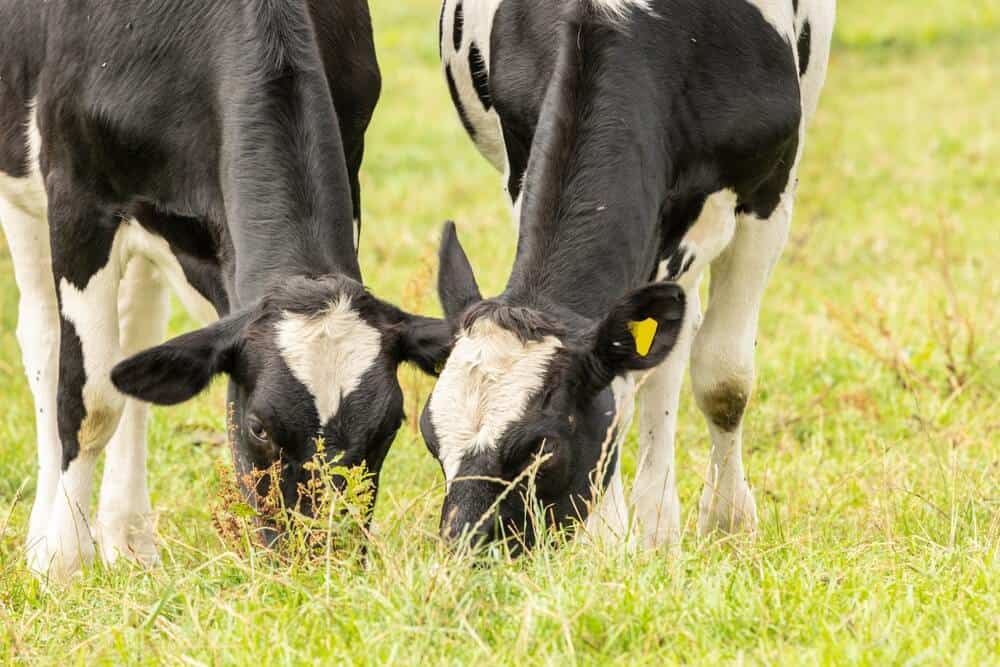 As explained, cows can and will eat meat on occasion. Their feed also contains animal protein. So, why are they considered herbivores instead of omnivores?

The reason is their digestive system.

Cows are ruminating ungulates, which basically means they have a four-chambered stomach specialized in digesting and absorbing most nutrients from plants.

These compartments are divided into a rumen, reticulum, omasum, and abomasum.

Once ingested, the ends up in the cow’s rumen where bacteria ferment it. The fermentation process produces volatile fatty acids, which are the cow’s main source of energy, as well as some vitamins.

Instead, their stomachs initially soften the ingested plant materials in the first chamber.

During the digestive process, which can take anywhere from one to three days, the cow regurgitates soft feed wads from the rumen to re-chew and re-swallow them.

This process makes easier to digest, allowing gut bacteria to break down cellulose which is a plant-based material.

Another telltale that cows are herbivores is the anatomy of their mouths.

Unlike omnivores and carnivores, cows don’t have front teeth on their upper jaws.

The incisors on the lower jaw press against the hard upper dental pad, enabling the animal to tear off grass. Cows use the molars at the back of their mouths to chew.

Overall, cattle digestive systems are not developed for digesting meat or other non-plant materials, which is why they are considered herbivores.

Can Cows Survive On Grass Alone?

Cows can survive on grass alone, but only if the abundance of grass and its nutritional value are enough to meet their dietary requirements.

Johnsongrass and bermudagrass have the highest nutritional values. They contain 11.6% and 11.4% crude protein, respectively.

Bahiagrass is another excellent choice. This grass type has a crude protein content of 9.7% and 56% total digestible nutrients.

While all cattle can survive on grass alone, dairy cows, lactating or pregnant cows, as well as calves typically thrive on a mixed diet of grass and legumes.

The only thing to keep in mind is that straight alfalfa diets can lead to bloating and digestive troubles.

As a rule of thumb, legumes typically have twice as much crude protein as grass, even if both grass and legumes provide the cow with the same levels of energy.

Typically, the best diet for pasture-raised cattle is a combination of grass and alfalfa (or other legumes, such as clover) and other plant materials the cows can find while grazing or browsing.

Are There Any Omnivore Cattle Breeds?

Generally, we think of cows as herbivorous animals. In fact, there are no omnivore cattle breeds.

However, this doesn’t mean that there aren’t any omnivorous cows out there.

While an omnivore diet in cattle is generally the result of nutritional deficiencies, scientists discovered a group of feral cows in the Hong Kong area that have become omnivores.

These cows live in parks near human settlements. They have access to pastures and plant materials, but they prefer eating barbecue leftovers – most likely due to a lack of nutritious grasses in their home ranges.

An analysis of their gut microbiome also revealed a higher intestinal flora diversity, suggesting that their digestive traits adapted to a mixed plant- and meat-based diet.

Scientists believe that this dietary change observed in Chinese cows is an adaptation response that allows cattle to maintain feeding efficiency as a consequence of environmental changes.

Cow Diet Vs. Other Animals

Cows are primarily herbivores, even though they can sometimes eat meat or turn to omnivorous diets in certain conditions.

But what about other farm or wild animals? This is how they compare.

Like cows, goats are herbivores. However, they have a more diverse diet that consists of grass, mosses, weeds, and, sometimes, even tree bark.

Goats can also eat an assortment of fruits and vegetables, including tomatoes, lettuce, carrots, spinach, celery, berries, apples, and more.

Herbivorous mammals, sheep spend a good part of their day grazing on grass and weeds.

When raised in enclosures with no grass to graze, they are typically fed hay and silage, such as fermented hay or corn.

Similar to goats, sheep also like vegetables and apples. However, they only rarely feed on them, pasture-raised sheep preferring grazing rather than browsing.

Buffalos are part of the same family as cows, and they have similar diets. As ungulates, buffalos also feature four-chambered stomachs and feed on grasses, weeds, buds, and other plant materials.

In the wild, water buffalos also feed on aquatic plants, as well as shrubs and trees when they can’t find herbs or grass.

Bears are often depicted as honey lovers and are omnivores. However, their diets consist mostly of plants and insects. They also eat fish and meat.

As apex predators, bears actively hunt and also take advantage of carcasses and carrion. Although hunting cows is rare, bears will definitely feed on a cow carcass.

Dogs, like bears, are omnivores. However, their diet consists mostly of meat. Plant materials are consumed in periods of scarce availability or due to neglect from their owners.

Wild or feral dogs usually hunt small mammals. When living in packs, they could go after larger prey, too. Like bears, dogs will also eat roadkill and livestock carcasses.

Pigs are naturally omnivorous, eating whatever is easier to obtain. When raised by farmers, pigs are usually fed a plant-based diet.

In the wild, they can eat vegetable materials, small mammals and birds, eggs, roots, flowers, and even dig for truffles.

Near human settlements, domestic and wild pigs alike can take advantage of kitchen waste and garbage.

Cows are not omnivores, even if they can sometimes eat meat. The digestive system and mouth anatomy are proof that cows are herbivores. In the wild, cows will only eat meat or bones if they lack essential nutrients such as amino acids, vitamins, or minerals.

In these circumstances, cows have been observed eating live chickens.

Feral cow populations living near urban settlements may also turn to omnivorous diets as a response to the change of environment and lack of fertile pastures.