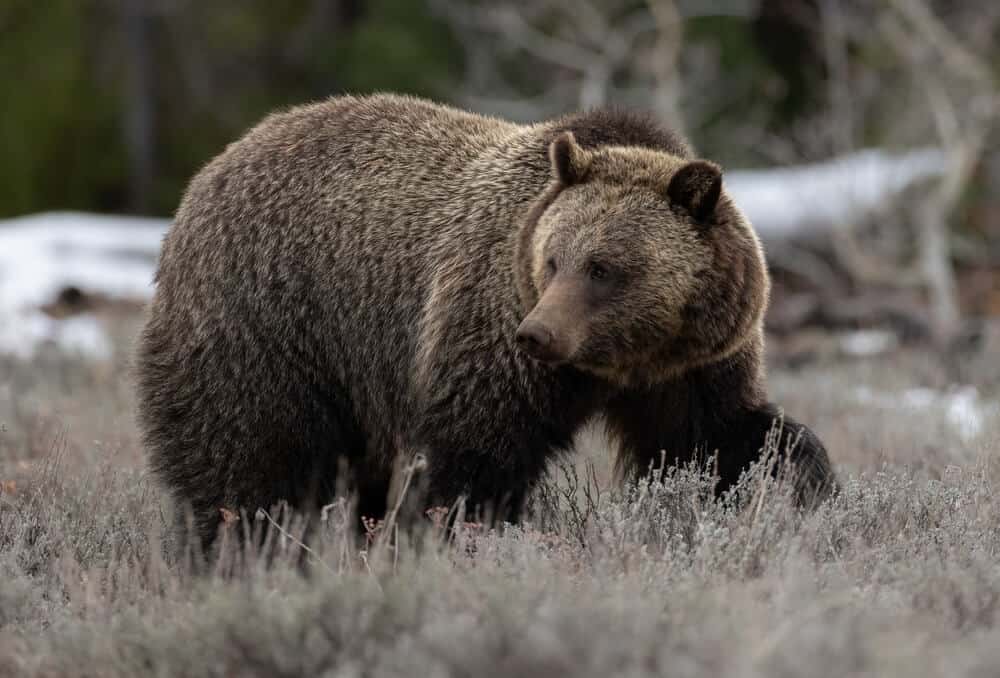 Bears are not related to pigs. Their taxonomic connection ends with the Mammalia class, where they split into two separate orders. As mammals, they do share some similarities, and we even use the same names for males and females. But overall, they are very different animals. The closest relatives of bears are seals, while pigs are closely related to peccaries.

Just because two animals look different doesn’t mean they don’t share a close common ancestor. On the other hand, differences in appearance and behaviors tend to stem from animals branching away on the evolutionary tree.

It’s important to look at the taxonomies of different animals to determine their true relationship. Appearance and behavior aren’t enough on their own.

Bears and pigs look and act differently from each other, but they also have similarities. How closely related are the two?

Differences Between Pigs And Bears

Most of the differences between bears and pigs fall under one umbrella: they have no close relation in taxonomy.

Taxonomy is the science of categorizing animals based on common features and if they possibly share an ancestor. The categories begin with kingdom, then move to phylum, class, order, family, and so on.

In short, both pigs and bears are part of the Mammalia class, but that’s as close as their taxonomic relationship gets. Bears and pigs also have differences that are more obvious than just their scientific classification.

Pigs Are More Social Than Bears

Both feral and domestic pigs are very social animals. They form matriarchal groups of “sounders” containing around one to six sows and their offspring.

Sometimes the young will form their own home ranges as they reach adulthood near their mothers. Even though males are solitary, they will approach other groups of pigs during mating season.

During this time, they may show some aggression towards other males, like many animals. However, when it’s not breeding season, even males tend to tolerate each other instead of continuing their aggression.

Bears, on the other hand, are solitary animals. Mothers can raise their cubs for up to 17 months depending on species. Once they’re strong enough and the mother is ready to mate again, they go their separate ways.

Outside of a mother raising her cubs, bears tend to keep to themselves once they’re adults. Males and females only join together for mating.

Bears are not territorial, and occasionally they will tolerate each other in areas of abundant . On the whole, though, they show a certain respect for one another’s personal space.

Bears Are Hunters, Pigs Are Foragers

Another significant difference between pigs and bears are their habits. Bears are both opportunistic feeders and predators. Their habits vary from season to season and with availability.

Most bears have bodies built for tearing flesh. They have incredible strength, massive arms, and sharp, strong claws. They will eat fish and the calves of cattle when they can get them.

Common pigs don’t have as much predatory ability as bears. This doesn’t mean they don’t eat other animals, but they tend to be much smaller than the prey of bears.

Pigs only occasionally eat small vertebrate and invertebrate creatures like insects and earthworms. They root around in the ground for instead of stalking and chasing down larger prey.

Pigs rely on their senses more than their physical strength to find . They have a keen sense of smell, on par with a dog’s. This helps them when foraging for hidden such as underground truffles.

How Are Pigs And Bears Related? 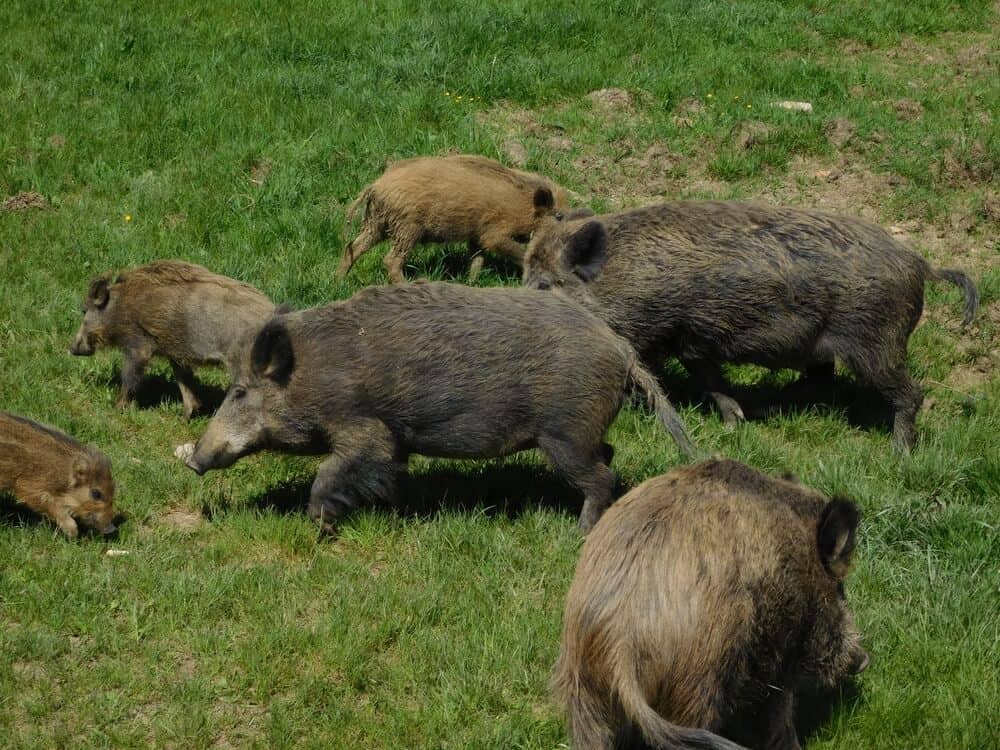 If pigs and bears are so different, why do some people think they could be related?

In fact, there are some similarities between bears and pigs.

Pigs And Bears Are Both Called Boars And Sows

A common reason people may think bears and pigs are related is because of their names. Not the species names themselves, but the terms we use to refer to the males and females.

Pigs And Bears Are Both Omnivores

Although their methods of gathering may differ, bears and pigs both eat plant matter and other animals. This makes them omnivores, even though bears belong to the Carnivora order.

Carnivora simply means the animals share an ancestor who was carnivorous.

While bears are better known for eating meat, such as fish, they also eat fruits and insects. Pigs also eat insects, as well as earthworms. They tend to eat plant matter most of the time, though, including fungus and acorns.

Bears And Pigs Have The Same Teeth

Bears and pigs have similar tooth types. They have “bunodont” teeth, which have low, rounded cusps. They’re all-purpose teeth that are good for crushing and grinding.

These teeth are common among many mammals, including humans. They are especially common in animals with broad diets that include foods with a wide variety of consistency.

As bears and pigs are both omnivores, it’s no surprise that they have the same general-purpose teeth.

It’s common knowledge that eating undercooked pork could lead to illness. However, the parasite that causes this illness (trichinosis or trichinellosis), doesn’t only live in pigs.

It can be hard to determine if an animal has the parasite or not. They may show some lethargy, but otherwise appear normal. Therefore, cooking pork and bear meat thoroughly is a must to avoid illness.

This is especially important for bear meat, as the Trichinella infection is preventable in domestic pigs. Unfortunately, there is no method for preventing the infection in wild animals such as bears.

What Is The Closest Living Relative Of A Bear?

Pigs may not have a close relation to bears, but there is one animal alive today that’s closer than any other. They may look different and live in very different environments, but seals and bears are in fact close relatives.

Both bears and seals both fall under the Carnivora order. That makes seals one taxonomical step closer to bears than pigs are.

Seals are marine mammals, but their ancestors had true flippers much earlier than others like whales and dolphins.

This means the seal’s transition from land to sea mammal was earlier than the others. That in turn means that they likely have a different ancestor further back in history.

For a long time, scientists searched for where seals branched into true marine mammals. Then, a fossil dubbed Puijila was discovered.

This fossil shows that Puijila likely had webbed feet, tying it to today’s seals. It also had teeth and a skull shape that indicated it was a form of seal.

It also had four legs and a long tail, indicating it was somewhere between a land and marine animal. Based on the fossil analysis, experts believe the Puijila is a common ancestor of seals and bears.

The discovery led to a complete reclassification of early pinnipeds (e.g., seals).

What Other Animals Are Related To Bears?

The fossil that connects seals to bears also connects bears to the Mustelidae family. Mustelids include badgers, otters, and weasels.

These animals are all part of the Carnivora order, but you can find other relations by continuing down the hierarchy.

Bears belong to the latter, which means they’re closer to dogs than cats. Carnivora is where the connection between bears and cats stops.

Are Humans Related To Bears?

Humans are not related to bears outside of the fact that they’re both mammals. Bears are part of the Carnivora order, while humans fall under the order of Primates.

Humans are no closer relatives to bears than pigs are. And in the same way, pigs and humans have little connection to each other as well.

What Animals Are Related To Pigs?

Like Carnivora, the Artiodactyla order has several families within it. One of these is, of course, Suidae, which is the family of pigs and hogs.

The families in Artiodactyla are all ungulates. This means they all share the trait of hooves.

Ungulates include animals such as deer, cows, sheep, and even deer. There’s some connection between them all, but like in Carnivora, some are closer than others.

Among the other nine families, members of Hippopotamidae and Tayassuidae are the closest relatives of pigs. Hippopotamidae, as the name suggests, contains hippos. Tayassuidae is the family to which peccaries belong.

It’s not that surprising that some believe bears and pigs might share a close relative. After all, they’re both omnivores and they share the same type of teeth. We also call the sexes of each species by the same names.

However, many mammals share these similarities in behavior, and that’s where their connection ends. Pigs belong to the order Artiodactyla, while bears are part of the Carnivora order. Pigs and bears are not closely related.

Instead, bears share a more common ancestor with today’s seals. Additionally, pigs are genetically closer to peccaries and hippos than bears.