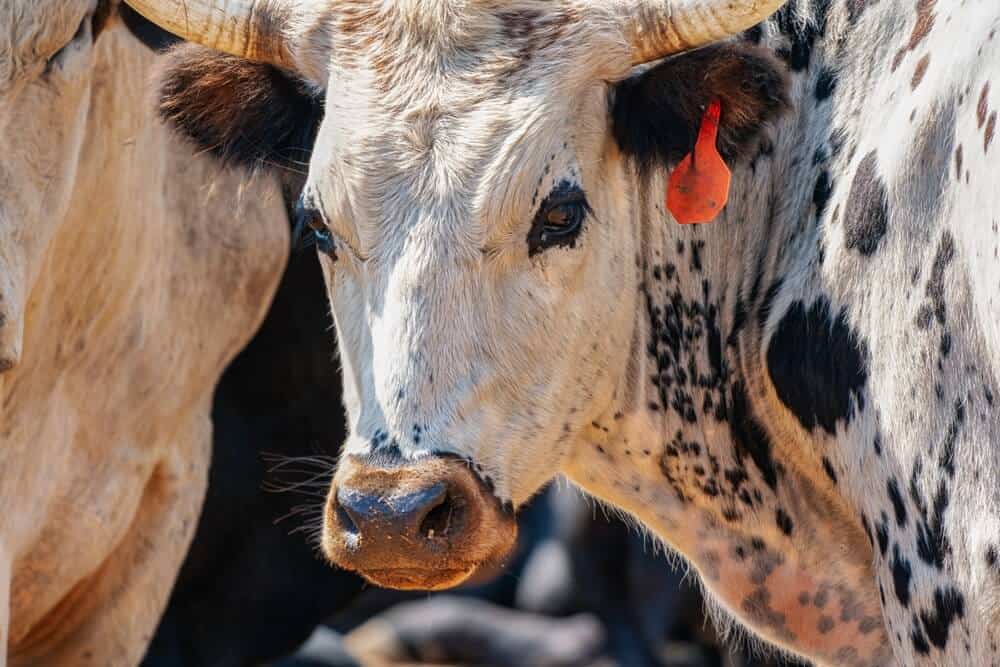 Learn more about cows, their classification, and whether they live only on land or also in the water.

Are Cows Classified As Mammals?

Yes, cows are classified as mammals, together with more than 5,400 other species. Cattle belong to this class because they possess all unique features specific to mammals, which we’ll discuss in more detail below.

Mammals aren’t by far the most widespread species in the world. For instance, there are approximately 91,000 species of insects and 32,000 species of fish worldwide.

Thus, we can safely say that mammals are a rather exclusive group in the animal kingdom even though it comprises the largest animal species both on land and in the water.

What Type Of Mammals Are Cows?

Cows are placental mammals. Female cattle have a uterus. Once impregnated, the uterus lining transforms into a placenta where the embryo and then fetus develops until birth.

The gestation length is similar to that of humans. Cows give birth to one or two calves about nine months after impregnation

Are Cows And Sea Cows The Same?

Cows are the most widespread type of livestock, with an estimated global population of over 1.4 billion.

You might have also heard people talk about sea cows. Are they an amphibious cow subspecies or a separate species altogether?

Sea cows, manatees on their original name, are nicknamed this way due to their voracious appetites and the fact that they spend around eight hours per day grazing – much like their land namesakes.

However, manatees are now extinct in the wild.

A few select facilities in the USA serve as manatee rehabilitation centers, and you can admire these marine behemoths in captivity. Yet, it is still unsure whether they will ever make it back to the ocean.

Female whales are also called cows, while males are called bulls and offspring are called calves.

What Animals Are Cows Related To?

Cows are classified as artiodactyls, an order including even-toed ungulates. Thus, they have a variety of close and distant relatives.

The closest relatives to cows (Bos taurus) belong to the same genus (Bos) and include gaurs, yaks, bantengs, and kouprey, the national mammal of Cambodia.

Cousins of cattle are all species belonging to the Bovidae family.

This family includes all buffalo species, bison, elands, gayals, tamaraw, antelopes, and gazelles. Animals apparently unrelated to cows, such as sheep and goats, are also part of this family.

More distant relatives include pigs, wild boars, warthogs, hippos, and even some marine mammals, such as whales and dolphins.

Are Cows Related To Whales?

Cows and whales look nothing alike. They even live in completely different habitats; one is a land mammal while the other inhabits the oceans.

Yet, they have more in common than one might believe – they are relatives.

Scientists claim that cows – together with all artiodactyls – are the closest living kin of whales. From all, hippos share the most DNA with the marine mammals, but cows, pigs, giraffes, and camels also share DNA similarities.

In fact, as far as DNA similarities go, cows are closer related to whales than pigs.

This surprising trait is explained by the fact that whales (as well as dolphins and other cetaceans) evolved from a hoofed ancestor called Indohyus.

This raccoon-sized mammal, now extinct, had an amphibious lifestyle, feeding on land but running into the water when sensing danger. Its skeletal anatomy presents elements found in modern hippos.

However, the jaws and an ear bone called involucrum are proof that they are ancestors of whales.

The involucrum bone isn’t present in any mammals except for whales and whale ancestors, its role being that of helping these marine animals hear underwater.

Cows are mammals because they display all unique characteristics specific to this group.

Mammals are a group of warm-blooded animals characterized by the existence of mammary glands – that give the group its name.

These mammary glands produce milk that all mammals use to feed their young.

Examples of mammals include the -billed platypus, rats, bats, dogs, cats, cows, kangaroos, and even humans.

Unique features that all mammals display, apart from mammary glands, include:

A quick overview of bovine anatomy shows that cows have all unique mammalian traits mentioned above.

They are warm-blooded animals that breathe through lungs.

Their bodies are covered in hair, the lower jaw is attached directly to the skull, and they have a muscular diaphragm that divides the upper thorax from the abdominal cavity.

The anatomy of their stomachs, which presents four chambers, places cows in the order of ungulates. Due to their hoofed feet with even toes, cows are further classified as even-toed ungulates.

Like the vast majority of mammals, cows develop their offspring in the uterus inside a placenta and give birth to fully developed young. This makes cows placental mammals, the same as whales and humans.

Cows obviously have mammary glands that produce milk – dairy cows are bred for this specific reason.

However, like all mammals, cows only produce milk when pregnant or after they have given birth to a calf.

Thus, in order to ensure dairy production, farmers impregnate cows every year and then separate the mothers from the young to collect and use the milk for dairy production.

Are Cows The Largest Mammals?

Cows are large mammals that can grow up to 5.5 feet high and weigh around 2,000 pounds. Their length often exceeds eight feet.

Nonetheless, they aren’t the largest mammals in the world.

Elephants are larger and heavier than cows, and African bush elephants are the largest land-dwelling mammals in the world.

They can weigh up to seven tons and reach up to 13 feet in height and 24 feet in length.

When considering all mammals, these behemoths aren’t the largest either. The largest from all mammals in the world are the blue whales, which can weigh up to 200 tons and reach magnificent lengths of over 100 feet.

Not only are blue whales the largest mammals in the world, but they are the largest vertebrates that have ever lived.
What Mammals Are Larger Than Cows?

While cows may seem large, there are many species that outgrow them. Even in their own family, bison and buffaloes are larger than cows.

Rhinos, hippos, and giraffes are all larger than cows. Most horses are also taller than most cows, even if they are typically lighter.

What Type Of Mammals Are Cows?

Cows are placental mammals. Female cattle have a uterus. Once impregnated, the uterus lining transforms into a placenta where the embryo and then fetus develops until birth.

The gestation length is similar to that of humans. Cows give birth to one or two calves about nine months after impregnation.

Cows are warm-blooded animals that give birth to live young. Mothers produce milk and breastfeed their young. Thus, cows are mammals.

As mammals, these ungulates are part of a group that counts over 5,400 species, all sharing the same unique characteristics among vertebrates.