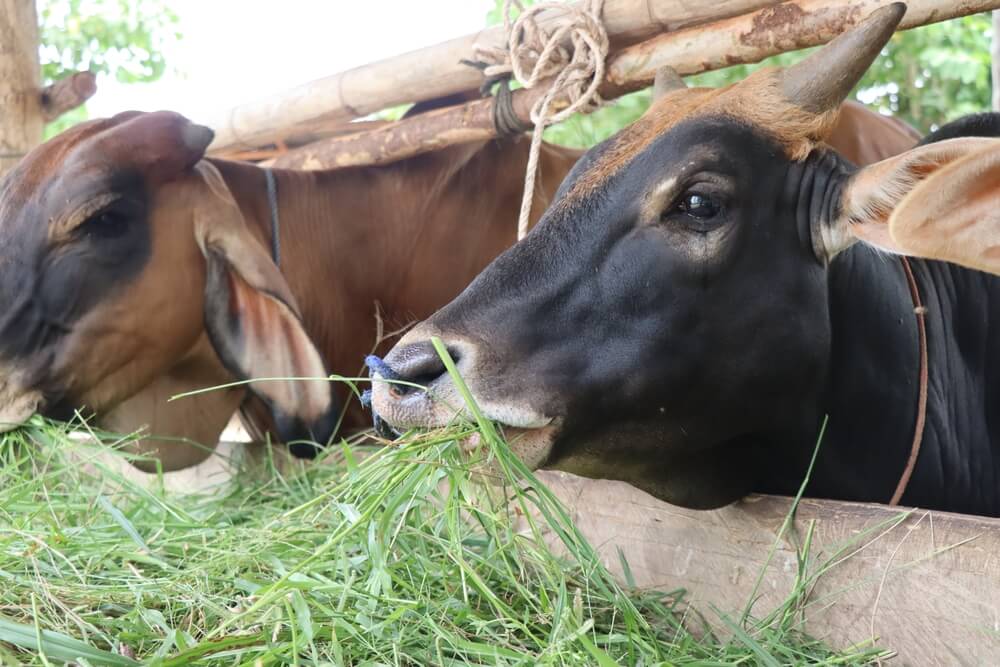 Perennial warm and cool-season grasses are the best types of grass for cows to eat, depending on where you live. Bermudagrass and bahiagrass are the best options in warm climate areas. Orchardgrass, tall fescue, and perennial ryegrass are excellent choices in cold climate zones. Aside from grass, you should also seed clover, peas, or alfalfa in the cattle pasture.

Grasses are the main plant type pasture-raised cattle feed on. However, they may not provide the cows with all the nutrients they need.

Read on to find which grasses give cattle the most nutrients and energy, and what else the cows should eat (and even potentially fatten them up!).

What Is The Best Grass For Cattle?

Choosing the best grass for cattle pastures is often challenging. As you might know, grasses are divided into warm-season and cool-season, based on their period of growth.

Thus, choosing the right type of grass for cattle should be done based on the climate in your area.

Hot and humid areas with annual temperatures between 80° and 95° F are best suited for warm-season grasses.

Cool-season varieties are best suited for zones with temperatures between 60° and 70° F, such as the Pacific Northwest and the North-eastern regions of the United States.

In transition areas, it is best to opt for warm-season grasses in summer, then reseed the pasture with a cold-season variety in fall.

These grasses are a good choice for pastures in the southern US or other areas with hot summers and mild winters.

Perennial bermudagrass is the best choice for pastures in warm climate areas. It has the fastest growth of all warm-season grasses and excellent nutritional value both as fresh forage and hay.

This grass type has a crude protein concentration up to 16% and over 60% total digestible nutrients.

It is also rich in minerals, including potassium, calcium, phosphorus, zinc, manganese, and magnesium.

Its nutritional value diminishes when fed as hay, but it is still more nutritious than other grass types. Overall, bermudagrass is a good choice for dairy cows, beef cows and calves, and the first calf heifer.

Since bermudagrass is drought-tolerant, it also represents an optimal choice for pastures in arid or desert areas.

Another perennial grass, bahiagrass prefers wet areas and warm temperatures, making it a good choice for subtropical zones such as the southern Gulf and Florida.

Its nutritional value is similar to bermudagrass; fresh forage contains around 14.1% crude protein and around 64% total digestible nutrients.

A difference between this grass and bermudagrass is the higher content of phosphorus; however, bermudagrass contains more potassium.

Similar to bermudagrass, bahiagrass is an ideal choice for dairy and beef cattle alike, as well as calves.

Often overlooked, kleingrass is one of the most robust grass types. It isn’t very fuzzy about terrain, growing in drought-prone areas with deep sands or soils with moderate salinity.

These characteristics make it a perfect choice for the southernmost states of the US, including Texas, Arizona, California, New Mexico, and Louisiana.

Nutrient-wise, kleingrass contains less crude protein than bermudagrass or bahiagrass – around 10.7% to 11.7% in spring and summer.

While it grows all year round, its nutritional value drops in fall and winter, with absolute lows of about 6.6% crude protein.

This is why cattle grazing on kleingrass should also have access to a legume pasture growing alfalfa or soybeans.

These grasses are a good choice for areas with cool summers and harsh, cold winters.

Farmers in these areas should feed pasture-raised and free-range cattle a mixture of grass and legume hay in the coldest months.

One of the most versatile cool-season grasses, perennial ryegrass can grow in sunny and shaded areas alike. Depending on variety, it can even tolerate heat, so it can be an option for warm-to-cool climate transition areas.

Perennial ryegrass has high digestibility (around 80%) and contains around 24.3% crude protein. Annual ryegrass has similar nutritional values and is a good winter forage for cattle in warm season areas.

The only thing to pay attention to is pasture fertilization, as grazing on nitrogen-fertilized ryegrass can result in excessive protein intake in cows and potential urine scorching of the pasture.

Ideal for areas with wet winters, orchardgrass can thrive in almost all US areas except for Texas, Louisiana, and Florida.

In the southern states, it is a common option in mountainous areas. Up north, it can grow almost year-round except for the coldest months.

However, it can survive harsh winters beautifully as long as the soil is covered in snow.

Despite its poorer nutritional value compared to other grass types, orchardgrass is a popular choice for mixed-fed cattle.

It contains around 8% to 12% crude protein and has a total digestible value up to 70%.

Tall fescue is similar to orchardgrass as far as nutrition is concerned. It contains around 12.4% crude protein and has a digestibility value of 60%.

The main difference between these grass types is that tall fescue is only an option for pastures in cold climates. In temperatures over 85° F, it can become infected with an endophyte fungus that has a toxic effect on grazing animals.

Despite this shortcoming, tall fescue accumulates soluble carbohydrates that constitute an important nutrient for cattle in the colder months.

Often, grazing on grass alone is insufficient for cattle. To ensure proper nutrition, especially in transition areas, cows should also have access to legume pastures.

Below are the most nutritious options.

Clover thrives in cooler areas and has a crude protein concentration of about 24.9%. This legume is also rich in copper and calcium.

Another great option for cool climate pastures, peas contain around 22.6% crude protein and a digestibility coefficient between 83% and 88%.

One of the most common legumes for grazing pastures, alfalfa is one of the most protein-rich forages. It contains up to 30% crude protein.

However, it could lead to bloating, which is why a diet based on alfalfa exclusively is not recommended for cattle.

Cowpeas is not as protein-rich as the other options on this list, but it has a digestibility of over 60% for ruminants.

It is also rich in zinc, copper, calcium, and potassium.

Soybean is by far the most protein-rich forage for cattle, with a content of crude protein between 33% and 44%.

Its digestibility is also very high (around 86%), making it an excellent choice for calves and pregnant cows.

Alfalfa is one of the most nutritious forages, but feeding it to cattle is often subject to debate. This forage is often responsible for pasture bloat in cattle and consequential death due to the accumulation of excessive gas in the rumen.

To prevent bloating, it is recommended to feed cattle a mixed diet of grass and alfalfa. This can be achieved by seeding both grass and the legume in different pasture patches.

Pasture should be monitored regularly, as the legume is invasive and could expand to grass areas.

Cattle fed hay or dry forages in winter can also benefit from a mixed alfalfa and grass diet.

Are Grasses Or Legumes Better For Cows?

As a farmer, it could be hard to decide whether you should seed grass or legumes on the pasture.

However, the truth is that you should seed both.

However, legumes lead to pasture bloat if consumed in large quantities – this is true for all legumes, not only alfalfa. This is why a mixed diet of grass and legumes is the best feed for cows.

The table below shows the digestible energy values for various forages*:

*Data in the table was sourced from various scientific publications evaluating the nutritional characteristics of various forages in cattle.

Are There Grasses Cows Shouldn’t Eat?

There are plenty of grasses or legumes that could lead to poisoning in cattle. Tall fescue is one of these grasses, even though it is still a recommended forage for the winter months.

Sorghum, sudangrass, hemlocks, and lupines are other plants cows shouldn’t eat. Cattle are also sensitive to plants in the nightshade family.

Do Cows Prefer Grass Or Hay?

Hay is the typical diet for cattle in the winter months, but this doesn’t mean that cows actually prefer it. In fact, the contrary is true.

Cows prefer grazing on fresh grass, which is why seeding warm-season grasses in summer and reseeding the pasture with cool-season grasses in winter could keep your cattle happier, as long as the weather is warm enough for the grass to grow.

Perennial grasses are the best grass types for cows to eat, as you won’t have to reseed the pasture each year.

In warm climates, bermudagrass, bahiagrass, and kleingrass are popular choices. In cold climates, perennial ryegrass or orchardgrass are excellent substitutes.

No matter where you live, supplementing the cows’ diet with legume forages can maximize pasture yield and provide the cows with more nutritious meals.