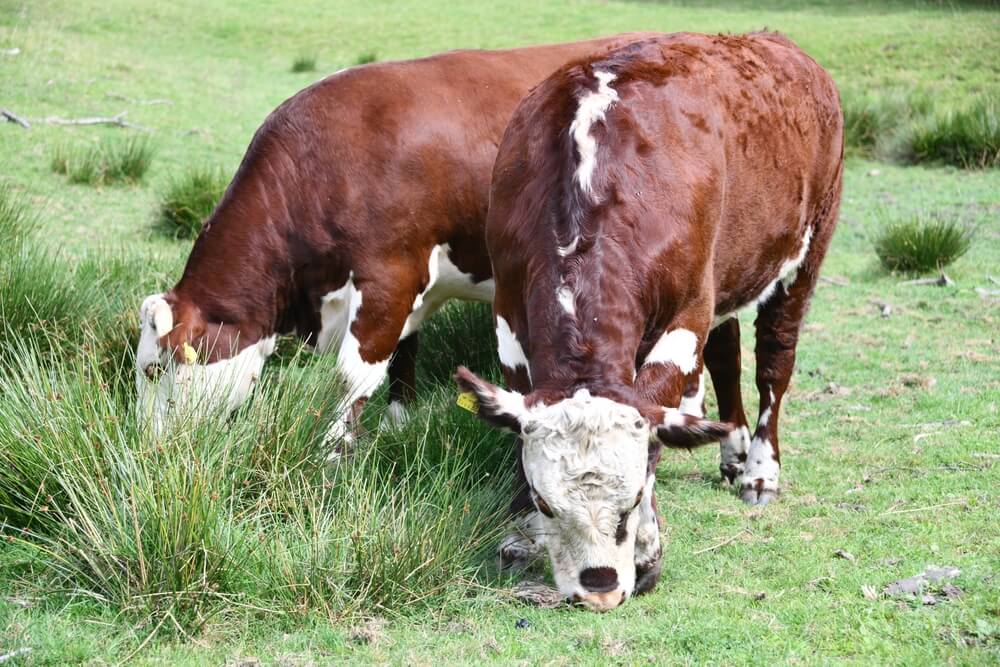 Cows can eat bread, and feeding them bread or other baked goods, including cake and cookies, is perfectly fine. The cattle feed industry even uses bakery waste and by-products to create nutrient-rich meals for cows. However, cows shouldn’t be fed bread or bakery by-products alone, nor should they eat stale or moldy bread.

Whether you want to increase calorie intake for your cattle during winter or prevent kitchen waste, here’s how you can introduce bread to a cow’s diet.

Bread can be healthy for cows, but its actual nutritional value and health effects depend on the type of bread cows are fed.

Whole-wheat, multi-grain, and white bread are the three main bread types consumed in the USA.

Cows can eat all these bread types.

Wheat is an important nutrient for cows, whereas studies on the yeast effect on cattle showed that this ingredient is neutral. In fact, yeast isn’t necessarily beneficial but, on its own, it doesn’t have negative health effects either.

Cows can also eat different grain types, such as wheat, barley, or oats, and they can consume seeds from sunflowers or pumpkins, too.

However, this doesn’t mean that cows should eat bread alone.

Several studies confirm that introducing bread and bakery products into the cattle diet is fine, as long as they are given a mixed feed (a combination of bakery products and hay or silage).

Feeding bread to cattle is often frowned upon. Reasons to avoid bread and feed cows with grain or silage instead go from potential health issues to costs.

However, the truth is that bread is a highly digestible for cattle, providing them with high energy and good protein amounts.

The table below shows a nutrition breakdown of bread*:

*The values in the table are general and provided by the Farmers Weekly magazine. Actual nutritional values could differ from bread type to bread type.

To understand how nutritious bread is, one must first understand the nutritional value of silage, which actually is “pickled” pasture grass.

As the table shows, bread provides 1.5 times more energy and almost two times as many proteins than silage. This is important when calculating bread feed ratio for all cattle, but especially so when feeding milk cattle.

In fact, a higher amount of protein stimulates milk production and can increase the yield of dairy cows. Pregnant cows and mothers with calves may also benefit from a bread-based diet.

Using bread and bakery by-products in cattle feed has been a trending topic in the past decades.

Scientists studied the effects of such a diet on dairy cattle metabolism and milk production, and concluded that replacing unprocessed grains with bread and other baked goods could be a good idea.

The study focused on the introduction of unsold bakery products into the cattle diet, excluding wheat and triticale from the feed.

Not only did a diet rich in bakery products improve the metabolic processes of cattle, decreasing the concentration of starch but increasing the value of lipogenic precursors, but it actually improved milk quality.

Cows in the 30% bakery products group had a milk yield of 35.1 liters of milk per day, 4.5 liters more compared to the control group. The milk was also richer in fat but lower in lactose; thus, more digestible for humans.

According to the study, the inclusion of bakery products in cattle diets also lowered the risk of rumen acidosis.

What Kind Of Bread Can Cows Eat?

There aren’t any contraindications regarding the type of bread cows can eat.

These animals can digest almost all plant-based foods, including grains, seeds, fruits, and even processed or sugary foods such as chocolate or candy.

The only kind of bread cows shouldn’t eat is stale or moldy bread.

Mold is a type of fungus that produces mycotoxins. When ingested, these toxins can reduce nutrient utilization and alter rumen fermentation in cows. They also suppress immunity and can lead to cellular death.

When ingested in high quantities, mycotoxins could lead to brain damage and, ultimately, the death of the animal.

Stale bread doesn’t affect cows in the same way moldy bread does, and it could theoretically be fed to cattle.

However, stale bread may have started to develop mold even if the fungus isn’t yet visible. Thus, it could contain mycotoxins and could have the same negative effects on cows.

For this reason, stale bread should also be avoided.

While each individual ingredient in the dough is safe for cows to eat, the uncooked yeast could lead to alcohol poisoning – in cattle, other animals, and even people.

This happens because the active yeast ferments the carbohydrates in the dough, transforming them into carbon dioxide and ethanol (alcohol).

When eaten in small quantities, raw bread dough can make the cows feel disoriented or bloated, just like people might feel after drinking.

However, eating high quantities of raw dough can lead to fatal alcohol poisoning.

Should You Feed Cows Grains Or Bread?

Whether you have a cow pet or a herd, finding the best feed is paramount.

Bread comes with advantages, but farmers may advise against it. Some even claim that giving cows grains and water is best, since bread could kill the cows.

However, both grain and bread could lead to cattle death if fed in large amounts.

Cows, like all ruminants, have four stomachs. Ingested ends up in the first stomach, called the rumen, where bacteria ferments it.

Wheat, grains, and especially bread speed up the fermentation process. This leads to the accumulation of gas in the stomach.

Normally, cows are able to just burp up this excess gas. However, fermented grains or bakery goods also produce a sort of slime.

Carbon dioxide attaches to this slime that prevents burping, so gas continues to accumulate in the cow’s stomach.

Excessive bloating can place pressure on the animal’s esophagus, lungs, and circulatory system, and could lead to death.

The same can happen to pasture-raised cows that get into a field of grain or alfalfa. Thus, grass-fed cattle are also at risk if you don’t control their diet.

This doesn’t mean that you shouldn’t feed cows grains or bread. It only means that the feed should be mixed.

Ideally, it should contain a mixture of grains (or bakery products or legumes), grass, corn, and other plant materials.

Reasons To Give Cows Bread

As explained, bread is highly nutritious, providing cattle with more metabolizable energy compared to hay or silage. It is also richer in protein.

However, these are not the only reasons to give cows bread.

In fact, bread is a good source of minerals and vitamins. Most types of bread are enriched with iron and calcium. Bread also contains thiamine, selenium, riboflavin, manganese, and folate.

All these nutrients are essential for both people and animals, cattle included. As such, feeding leftover bread to cows can help prevent nutritional deficiencies and keep the herd healthier.

We all know that bread contains carbs and that it makes you gain weight fast – after all, bread is banned from most diets.

What you may not know is that it has the same effect on cows.

Bread – and other baked products – provides cattle with a more concentrated meal.

Baked goods contain less moisture and more dry matter than grass or silage. The carbs in bread are also digested differently than the starches in grass or hay.

Due to these differences, bread can help cows gain weight faster. This could be essential when dealing with malnourished cows or calves.

According to research, grain product waste amounts to $10 million – or about 30% of waste in commercial baking – per year.

Bread is a major contributor to the problem, alongside bread rolls and cookies.

Most of these products go to waste while still fresh, mainly because bakeries didn’t manage to sell everything they baked and dispose of a day’s batch to make room for fresh products the next day.

What Other Human Foods Can Cows Eat?

As mentioned, bread is not the only originally destined for human consumption that cows can eat.

Here are a few other things you can give your cattle.

They contain wheat and yeast, just like bread, as well as sugar. Cows can digest all these ingredients.

Giving chocolate to cows may seem weird, but the practice isn’t exactly new.

In fact, chocolate can provide cattle with the energy, fibers, and protein they need, especially if the grass or hay is not of the best quality.

Some farmers even include chocolate in the cattle diet to improve the meat quality. For instance, chocolate-fed Wagyu is considered the new luxury beef.

Cooked meat originally destined for human consumption – aka, leftovers – is also fine to include in a cow’s diet.

Feeding cattle fast foods may seem as strange as feeding them chocolate.

Apparently, however, French fries are another fine choice for cows.

Cows can eat corn, and they can eat popcorn too.

Feeding them the buttery goodness isn’t even new. An article in a 1932 newspaper tells us that this practice has been around for decades.

Cows can and will eat cheese if given to them.

Cows do eat bread, and including the baked product into their diet can have multiple advantages. However, feeding cows with bread or baked goods alone can be detrimental.