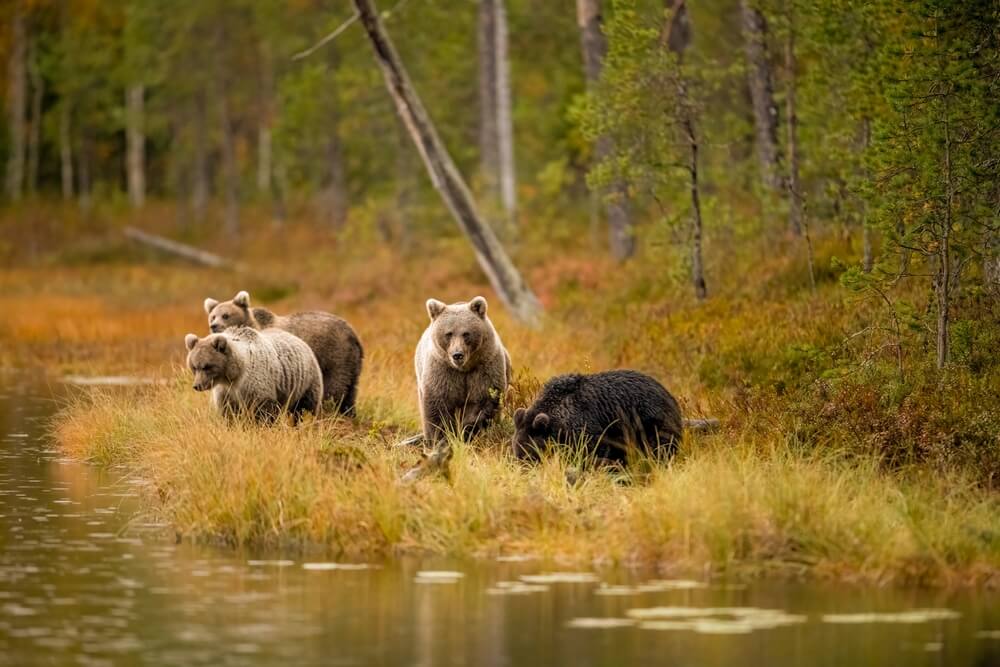 There are no bears in modern England. The European brown bear went extinct in England at least 1,000 years ago from overhunting and climate change. The climate is too temperate for many bear species and has too few suitable habitats. Bears were once imported for entertainment, but outside of modern conservation efforts, there are no more native bears in England.

Modern bear species live all around the world, from the Arctic to the tropics.

Although there are only eight in existence today, there were once more species of bear in the world. They also lived in a variety of habitats, including England.

The European brown bear is the only bear known to have lived in England. It went extinct in that area due to warming winters and human advancement.

Today, not only have the bears disappeared, but so has much of the forest in which they once lived.

Other bears were imported to England over the centuries. Most of them were brought for entertainment or to harvest them for medicinal purposes.

But there’s been a recent effort to return bears to England in controlled wild areas.

Why There Are No Bears In England

Bears live in a variety of habitats around the world. While England’s climate is suitable for some, they have long been hunted to extinction.

For others, the climate in England isn’t right.

Polar bears, for example, only live in the Arctic Circle. Their thick fur, black skin, and insulating layer of fat are adaptations for a climate that averages below 10°C (50°F).

On the other end of the spectrum, there are bears that prefer a warmer climate. Asiatic black bears, sun bears, sloth bears, and spectacled bears all live in tropical climates.

Other bear species, such as grizzlies or black bears, have better adaptations for England’s temperate climate. However, due to urbanization and deforestation, there isn’t any suitable habitat for them there.

In the Middle Ages, there were vast forests covering England. Experts call these forests “ancient woodland.” Unfortunately, today these woods only account for about two percent of the UK’s land area.

Then there’s giant pandas. Bamboo makes up 99% of a giant panda’s diet. Bamboo is not native to Europe, so there’s no source outside of captivity for panda bears.

Were There Ever Bears In England?

At one point, European brown bears were an important predator in the forests of England. They coexisted with grey wolves, wolverines, and lynxes.

The brown bears possibly went extinct during the Bronze Age or Neolithic era. It’s difficult to tell exactly when the extinction happened, as little evidence remains in natural sites.

There is some evidence that cave bears once roamed England, though. Researchers found the remains of a cave bear in the Yorkshire Dales.

If these remains are in fact from native bears, then bears may have been around longer than previously believed. They may not have gone extinct until the early medieval period.

However, these remains may actually have come from bears brought over by the Romans.

The public used these bears for entertainment such as dancing and “bear-baiting.” This cruel practice of siccing dogs onto bears in an arena continued into the 19th century in England.

Importers still brought bears to England for other purposes such as education and medicinal resources until the 20th century. Bear grease was a popular “cure” for hair loss, for example.

Which Species Of Bear Lived In England?

The only bear species to live in England is the European (or Eurasian) brown bear. Some experts believe there were over 13,000 brown bears in England at one time.

The European brown bear is one of several subspecies of Ursus arctos. However, there’s not much difference between them other than where they live.

For example, the grizzly bear subspecies is really just a brown bear living in mountainous regions like Montana.

In places like Southern Alaska or towards the coast, they don’t say “grizzly.” They call that same bear just a brown bear.

The areas in which they live do change their habits slightly, but genetically they’re the same kind of bear.

Conservationists Want To Bring Bears Back To England

There is a modern effort to restore the European brown bear to what remains of England’s ancient woodlands.

It’s not a completely wild habitat, however. The bears and other predators are fed and handled by staff.

The goal is to show the public what England once was and prompt discussion about the importance of conservation.

One conservation topic that’s particularly important to them is rewilding.

This is the return of species that either are on the decline or have already vanished from their native environment. It also includes replanting native trees to further diversify the English biome.

Supporters of rewilding believe it will impact the environment in a positive way.

Bears, for instance, will clear undergrowth, which will allow in more light. Then, this will encourage new species to grow in the area.

Reintroducing old predators may also keep the ecosystem in balance. Deer populations often grow out of control, and predators like bears and wolves can keep them in check.

However, there are also concerns that the bears could be a danger to local livestock. They could also pose a danger to humans, both in terms of livelihood and physical safety.

Why Did Bears Go Extinct In The UK?

A key factor of the extinction of brown bears in England, according to a 2017 study, was climate change.

After Europe’s last ice age, warmer winters let humans expand their range. This sped up the overhunting of animals, including brown bears, as well as reducing the bear’s habitat.

The warming winters also reduced the rate of the brown bear’s reproduction. Brown bears give birth during their usual hibernation period, meaning they have to choose between one or the other.

The females make this choice based on their energy reserves at the beginning of the hibernation period.

It takes more energy for hibernation during warm winters, so there’s less energy to put towards reproduction.

The brown bear species has several subspecies, including the grizzly bear. However, these subspecies are not all that different on a genetic level, and the differences are mostly environmental.

This includes the European brown bear, the only bear native to England. This subspecies went extinct either in the Middle Ages or the Neolithic period.

The warming winters and the advancement of human civilization meant the bears lost their natural habitats and were overhunted. Today, there are no bears living naturally in the wilds of England.

There have been recent efforts to import bears back to England, like the Romans once did. The difference is that Romans and future civilizations often imported bears for inhumane reasons. People harvested bears for supposed youth-restoring materials or for cruel entertainment like bear-baiting.

Today’s importers want to restore England’s ancient woodlands by returning bears and other long-lost predators to them.