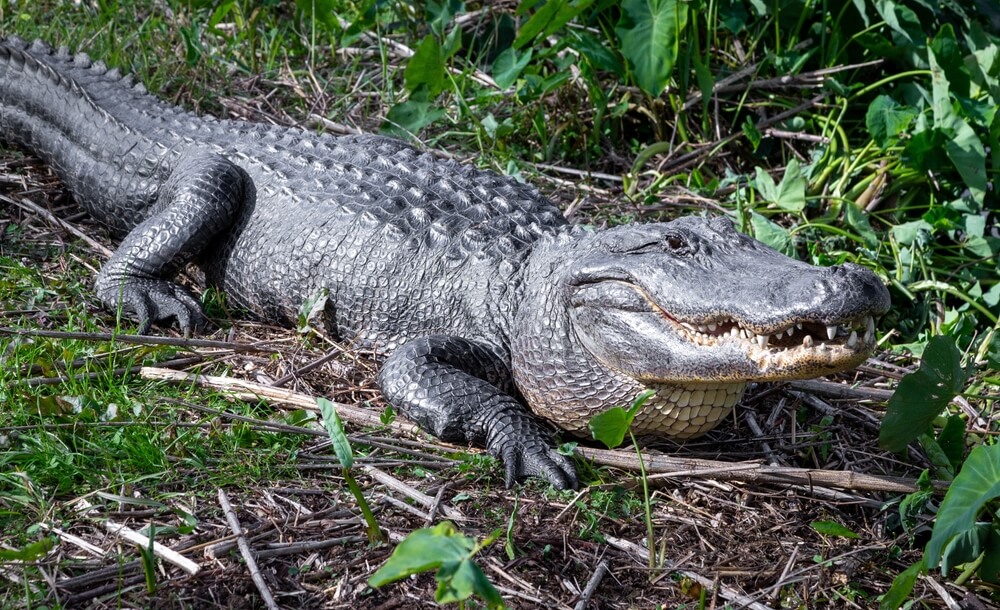 Alligators regularly consume venomous and water snakes. They are not picky eaters and snake venom does not affect them. Alligators are carnivorous and eat anything that fits in their mouths. Sometimes this includes plastic and even other alligators. Their impressive jaws are strong. American Alligators typically have 80 teeth, which are frequently replaced.

They hunt by camouflaging in murky water and striking quickly with their mouths open wide.

This article will go into detail about why and how alligators eat snakes along with other interesting facts.

Alligators are not afraid to eat venomous snakes. They are immune to snake venom.

Usually, alligators only attack young water snakes. Water moccasins can grow up to feet long and are thick snakes.

They are also quick swimmers, swimming up to 6 feet per second, which is why adults are typically spared from an alligator’s feast. Some water snakes are also venomous.

2 Types Of Snakes That Alligators Eat

Alligators will eat anything in their path when they are hungry. Two of the most common snakes that alligators eat are pythons and rattlesnakes.

Pythons and alligators have a unique relationship together since they can consume one another. They share similar hunting grounds and strategies. Both are opportunistic predators. This is especially a problem in Florida.

While pythons are non-venomous, they are some of the largest snakes in the world, at most growing 33 feet long. They use their large mouths to consume gigantic prey, typically in vulnerable positions.

When an alligator attacks pythons, they lunge for their head to try and get a hold of the situation before the python tries to constrict its body.

Although alligators do eat adult pythons, it is rare. They typically attack vulnerable juvenile pythons close to the shore or hanging off of branches.

Pythons are not the only snakes an alligator will consume, rattlesnakes make this list too!

If an alligator spots a rattlesnake in the water, like a pit viper, it will try to attack. However, this is different if the alligator is young.

Alligators are not the only predator to consume rattlesnakes, though. Rattlesnakes have a lot of predators, like owls, foxes, hawks, and feral cats.

Baby alligators do not eat snakes. When alligators first hatch, they are only about 6 to 8 inches long and live in small pods with other baby alligators. Because of their small size, they can only eat insects, small fish, and amphibians.

Instead of eating snakes, baby alligators are prone to be eaten by snakes. Typically, snakes are larger than juvenile alligators and some hunt them down.

Baby alligators also have to worry about predators like birds, river otters, large fish, and larger alligators. They are such easy prey that only 20% of baby alligators survive to adulthood.

Where Do Alligators Eat Snakes?

Alligators are typically found in shallow murky rivers, marshes, and lakes. They prefer wetlands and are most common in the U.S. Southeast including parts of Texas, Louisiana, Mississippi, Georgia, and Florida.

Alligators live in the water, but they can also walk on land. These giant reptiles typically eat snakes while in murky water. Some snakes can swim, while others live in low-hanging branches, close enough to the water for an alligator to strike.

Can Alligators Be Bitten By Snakes?

Alligators are immune to snake bites. While snakes can bite alligators when fighting and defending themselves, the bites typically don’t affect the large reptile.

Researchers indicate that alligator blood has a certain component that allows alligators to be unaffected by snake bites and their venom.

In the study, scientists reviewed the effects of two components of Eastern Copperhead venom and concluded that alligator blood is not affected by the venom.

Venom is not the only worry when it comes to a snake. Technically, all snakes can try to bite alligators, but it does not mean they are successful.

Alligators have tough skin made up of embedded bony plates, making it hard for a snake to bite through the armored skin.

What Kind Of Snake Can Eat An Alligator?

Although alligators are immune to snake venom, this does not mean there aren’t ferocious snakes large enough to swallow an alligator. Pythons have jaws that stretch wide enough to consume an entire alligator.

They are 200 pounds and can reach up to 23 feet long. Burmese pythons don’t chase their prey, instead, they are opportunistic hunters. These long snakes wait for the right moment, before sinking their teeth into their prey.

Pythons bite alligators to get control over their body.

Once they bite through an alligator’s tough skin, the python wraps its slithering body around the alligator constricting them. Every time the alligator takes a deep breath, the python squeezes tighter until it can’t feel the heartbeat anymore.

Afterward, when the python knows the alligator is dead, it opens its mouth wide and swallows its prey, starting with the head.

How Do Alligators Kill Snakes?

While some snakes kill alligators, it is more common for an alligator to kill and eat a snake. Alligators follow the same hunting style each time they attack their prey.

Listed below are common steps alligators take to kill and eat snakes.

Alligators are carnivores with large and pointy teeth. They hunt for their prey by slowly creeping close to them in the water before lunging and striking. Alligators are not picky eaters and eat any animal when an opportunity is present.

A significant part of their diet includes snakes. Alligators are so used to eating snakes, that the venom from their bites does not affect them.