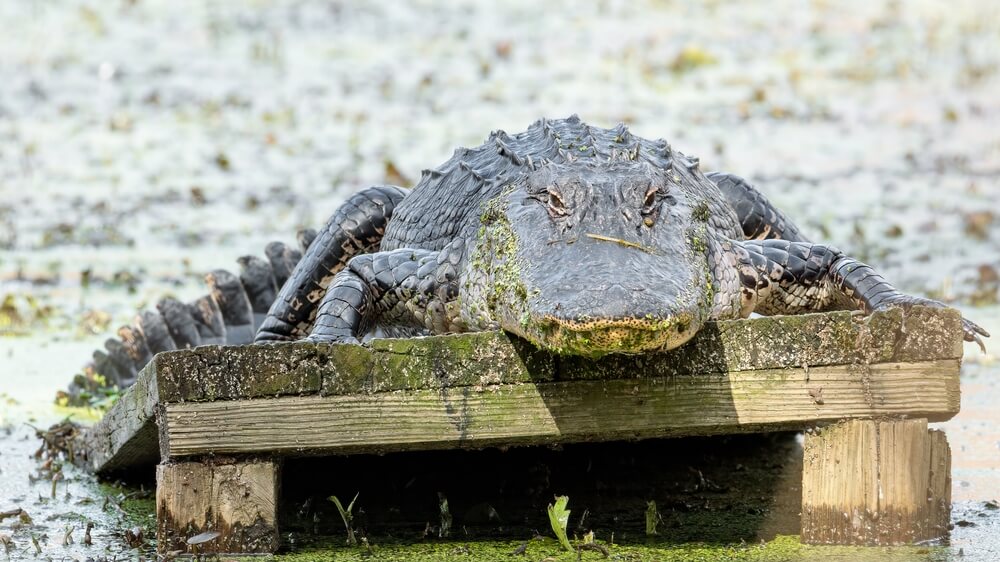 They also have powerful senses to help them successfully exhibit predatory behaviors. This includes their sense of smell.

Alligators can smell blood. They can detect carcasses, wounded creatures, and even menstrual blood from miles away with a powerful olfactory system. While alligators cannot smell underwater, they can detect smells at the surface as odors are released from within. They then use sensory organs on their bodies to detect any movement in the water as they approach concentrations of odor molecules in the air.

Alligators can smell human blood as well as blood from other animals.

Studies have found that predatory and opportunistic carnivorous animals, such as alligators, use the odor stimulus (molecules in air) of blood to find wounded prey.

The smell of blood can also signal warnings or information to respond with increased vigilance, flee, or indicate the reproductive status of a female.

How Far Can Alligators Smell Blood?

Animals in general have more olfactory receptors to smell than humans, which allows them to find sources, mates, threats, and so on.

Alligators can smell blood from caracasses, bleeding, and wounded animals from several miles away depending upon the air flow and amount of blood.

Alligators have olfactory and solitary chemosensory cells. This means that their nerve cells are stimulated by odors and can respond to noxious or bacterial molecules in the air.

Blood in particular can release a copper-like smell that alligators (and other animals) can detect.

When molecules of a substance are released into the air, they travel into the nose. Volatile substances, such as blood, give off more molecules, and have a stronger odor.

If there is a larger concentration of blood, there will be more molecules in the air. This can create stronger signals to animals.

If there is higher humidity in the air, this can trap odor molecules, preventing them from traveling further. However, humidity allows the odor to linger in the area in a more concentrated manner.

Are Alligators Attracted To Period Blood?

Alligators are attracted to period blood, just like any other blood.

While alligators tend to avoid human interactions unless threatened, hungry, and within proximity, blood from menstruation can send signals that something is nearby.

It may be best to avoid alligator-prone areas while menstruating to eliminate any risk of alligator interaction.

Can They Smell Blood Underwater?

Alligators are not like sharks and cannot breathe or smell underwater.

This is because they are reptiles with lungs (and do not have gills). They have valve-like structures that allow them to close their nostrils underwater.

When above water, alligators can be seen floating at the surface with their nostrils and eyes protruding. An alligator can only smell when the nostrils are above the surface of the water.

Therefore if there is a bleeding animal in the water, an alligator can detect it while it floats with its nostrils exposed at the surface.

Alligators also have sensory organs along their face used to detect movement in the water. The odor of blood in water can signal that something wounded is nearby.

Then as the alligator moves through the water it can pick up any movements as it hunts for the bleeding creature.

Why Are Alligators Attracted To Blood?

Alligators are attracted to blood because they have a strong sense of smell and an instinct to hunt.

They have a complex olfactory system with chemosensory cells. This system includes an olfactory bulb connected from the nasal cavity to the brain with one nasal compartment.

Alligators have two nasal cavities to breathe in air.

When the odor molecules are detected by these olfactory cells they increase their gular pumping.

Gular pumping is a respiration process where an alligator expands and contracts its pharynx (throat) rhymically to increase the amount of odor-filled air that goes into the olfactory system. It is like taking a deeper “sniff” to smell something.

This demonstrates that an alligator’s olfactory system is stimulated by chemo-attractions to sources that indicate , mating, threats, and so on.

As opportunistic and carnivorous hunters, the smell of blood sends signals to an alligator that is nearby. Once they smell potential , they will persevere to find it, even if that means climbing a tree.

Alligators Use Smell To Hunt

When an alligator detects a desirable odor, such as blood, it signals the alligator to investigate. They will continue to smell, looking for denser concentrations of the odor in an attempt to find the source.

If they are in the water, they use their integumentary sensory organs as well to detect movement.

By using both smell and these sensory organs, an alligator can more effectively hone in on prey such as snakes, fish, turtles, birds, and small mammals.

Alligators are effective and strong swimmers and hunt very well in the water.

On land, alligators can climb, run, and lunge to catch detected prey.

Alligators are attracted to many smells, including pheromones which are chemical odors found in sweat and other bodily secretions.

Desirable smells include those that stimulate an alligator’s appetite, search for habitat, or mating.

These include the following:

If they smell this it can indicate that the territory is occupied or there is a threat. However, this creates an odor that is offensive to all creatures, including humans and pets.

Ammonia is also considered a hazardous substance that is detrimental to environmental and human health.

There is no specific research on whether or not alligators can specifically smell fear itself. Pheromone communication within a species only works for that particular animal.

So, for example, an alligator only mates with other alligators because of species-specific pheromones.

However, an alligator can smell you regardless of your emotional state. The state of fear releases hormones such as cortisol and adrenaline, and you can also produce sweat with an increased heart rate as a response.

These chemical responses increase the concentration of odor particles produced by a person. These emit into the air which can then be detected by many animals, including alligators.

They may not recognize that you are afraid, but they can smell you.

Alligators have a powerful olfactory system to locate smells for hunting, breeding, and processing any threats. While they cannot smell underwater, they can detect odors at the surface.

While they cannot necessarily decipher when another animal or human is afraid, they can smell any pheromones or other odors that are released as a signal something is there. Odors will then cause an alligator to investigate the source.