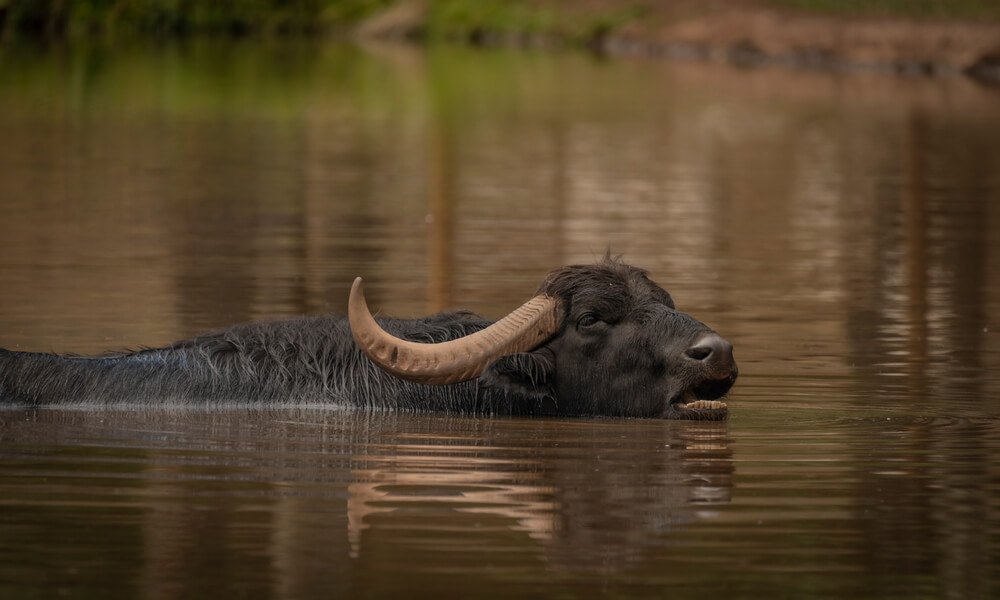 Bulls can swim, as can cows and even the calves. Cattle often swim across bodies of water to get to better grazing spots or pastures. Like humans, they may also dip in rivers, lakes, or ponds to escape extreme heat. Bulls and cows can swim in shallow and deep water alike, but they generally don’t go very far.

Dipping in a pond to escape summer heat is refreshing for both people and cattle.

In deeper water, most people enjoy a swim, but what about the cows and bulls? Do they also enjoy swimming?

Can Cows And Bulls Actually Swim?

Bulls and cows are associated with fields and mountain meadows rather than the water. However, it turns out that they can actually swim.

While the swimming abilities of cows haven’t been studied scientifically, evidence of cows swimming across rivers, lakes, or even in the sea is abundant.

Cattle typically get into bodies of water either to escape extreme heat or to reach better grazing spots.

When trying to escape heat, bulls mostly prefer shallow waters where their feet can touch the ground. If possible, cattle will also pick a shaded spot and will just stand there to avoid heat stress – since cows can’t sweat, heat stress can lead to death.

Free-range or semi-feral bulls also won’t hesitate to get into deeper water and swim to cross a river or lake to reach a better grazing spot. Cattle are also known for getting into the sea or ocean and swimming to nearby islets.

Since bulls are generally leaders within a herd, all other herd members will generally follow the bull into the water and swim alongside it.

How Far Can Bulls Swim?

As mentioned, there are no scientific studies about the swimming abilities of cattle. Thus, the only way to tell how far bulls can swim is by looking at anecdotal evidence.

The surprising fact is that cows can swim farther than expected – one of the longest recorded distances is over two miles, from Cedar Island to the Outer Banks of North Carolina.

Apparently, the cows went into the water to survive Hurricane Dorian, and they accomplished their mission gracefully.

However, swimming such long distances is the exception rather than the norm.

Typically, bulls and cows are known to swim around 350 feet or less, crossing lakes or rivers to reach more fertile grazing spots. However, long-distance swimming is only seldom recorded.

Bulls can swim long distances. However, most cattle don’t have to cross bodies of water to reach a pasture. Thus, they don’t have enough stamina for long-distance swimming.

Most cattle may even be reluctant to enter the water and swim for the first time.

However, bulls and cows – like most bovid – have a close relationship with water and rarely fear it. Once accustomed to swimming, most cows and bulls will likely enjoy leisurely swims or play in the water, especially on hotter days.

As mentioned above, bulls and cows can swim long distances regardless of their relationship with the water when it comes to survival.

For instance, a cow named Buttercup was the first living being to ever swim the Mile Tunnel between Leeds and Liverpool in England, back in 1912.

It isn’t sure whether Buttercup had any swimming experience before plunging in the cold stream, but she managed to swim the entire mile in about two hours.

Considering that bulls are larger and stronger than cows, they can likely pull off at least a similar performance.

Bulls, like most mammals, are agile swimmers. They can even hold their breath underwater, much like people can.

However, like humans – and all other mammals – they have to breathe.

This means a bull could remain underwater for a few minutes, but would need to resurface regularly to draw in fresh air. For this reason, it is generally agreed that bulls can’t swim underwater.

If you ever heard someone referring to underwater bulls or cows, know that they are most likely talking about whales rather than cattle – male whales are called bulls, whereas the females are called cows.

Do Cattle Love The Water?

As established, bulls and cows can swim and regularly cross bodies of water to get to grazing spots. They are also known to swim long distances when necessary. But do cattle actually love water?

According to research, they do.

While scientists haven’t studied the swimming behavior of cattle, a study investigated whether and how cattle use cow showers to stay cool in hot weather.

The researchers discovered that, when given the opportunity, cows use overhead showers voluntarily to lower their body temperatures.

Similar behavior can be observed in nature.

Cattle living in tropical and subtropical climates sit in the water voluntarily to combat heat or insects. In periods of extreme heat, cattle that don’t have access to a body of water can even be seen dipping their feet in their drinkers.

Thus, we can safely say that cattle love water.

We can’t say with certainty what cattle breeds like to swim. However, cattle living on islands or near bodies of water are more likely to swim compared to bulls raised on the peak of a mountain.

For instance, on the Scottish Isle of Skye, watching swimming cattle is an annual event that locals and visitors alike can witness. These cows and bulls are Limousins and Aberdeen Angus.

Similarly, the Huebner family from Bay City, Texas, drives their cattle across the Colorado River to their winter grazing on the Matagorda Peninsula every year. The Huebner family raises Beefmasters.

Belted Galloway and Sussex cattle in Northern Ireland are also known to swim about 330 feet across Lough Erne to access their summer grazing pasture.

According to breeders, cattle originated in coastal or island areas, such as Holstein, Asturia Mountain, Guernsey, and Jersey cattle – to name just a few – also enjoy swimming.

Can Bulls Swim In Chlorinated Water?

Bulls can swim in chlorinated water. However, this doesn’t mean they should.

A study on livestock water quality revealed that ruminants, including bulls and cows, are particularly sensitive to chlorine. When ingested, the disinfecting agent can kill all the good microorganisms living inside the cattle rumen.

Since bulls are likely to ingest some water when swimming, they shouldn’t swim in chlorinated pools.

If you want to provide your pet or farm bull with a swimming spot, the use of unchlorinated freshwater or saltwater is recommended.

Can Bulls Float In The Water?

There is no evidence that bulls can float in water.

In fact, if they don’t actively swim in deep water, they are likely to go under and drown.

Bulls’ Swimming Ability Vs. Other Animals

Bulls aren’t the only farm animals that can swim. In fact, most mammals can.

But how do cattle compare to other farm animals or ungulates?

Like bulls, pigs can swim and some even do so for pure enjoyment rather than necessity.

This is the case of famous Bahamas’ beach pigs that are often seen swimming in the ocean.

Chickens aren’t the first animal that comes to mind when thinking about swimming. They don’t even have waterproof feathers like ducks and geese.

Yet, chickens can swim and, much like bulls, they enjoy spending time in the water to escape heat.

Hippos look nothing like bulls, but the species are related to one another. Both are even-toed ungulates, and both like spending time in the water.

In fact, hippos love water much more than cows do, spending most of their days sitting in the water or even sleeping under it. Yet, hippos don’t actually swim even if they move swiftly through the water.

Kangaroos aren’t farm animals. However, this gamey meat is an Australian staple and some foodies even prefer it to steak or lamb.

Similar to bulls, horses can swim and often spend time in water on hot days.

Bulls can swim, and so can cows and calves. Typically, they swim to escape danger or to get to grazing pastures. However, bulls can also be seen swimming during the hot summer months, to cool themselves down or avoid insect bites.