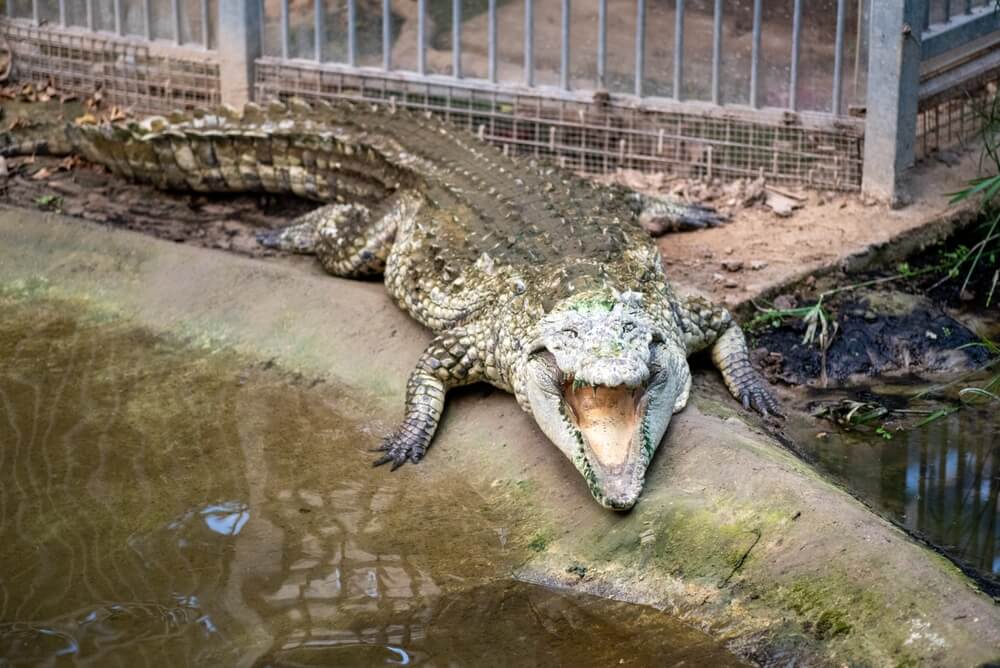 Alligators pose a fearsome threat to homeowners and are also highly sought for their hides and meat.

Whether alligators are killed for protection or sport, they are difficult to take down with bullets.

Alligators are not bulletproof. They have skin that increasingly thickens as they mature. The skin is covered with bony and hard scales along its spinal ridge and on top of its body. This scaly skin also surrounds the alligator’s powerful head. A powerful enough gun could penetrate this thick skin. However, most often alligators are killed with a lethal wound in a soft spot found behind the skull plate.

This article goes on to inform the reader in more detail about the anatomy of an alligator, the locations of kill spots, and the types of weaponry used to take an alligator down.

Can A Bullet Kill An Alligator?

Alligators (Alligatoridae) are large reptiles that thrive in freshwaters such as slow-moving rivers, lakes, swamps, marshes, and swimming pools.

Alligators can become a nuisance or danger when they are over 4 feet long and pose a threat to humans, pets, or livestock. Typically, this happens when human and alligator habitats overlap.

Professionals will shoot and kill alligators with a bullet for two main reasons. Either they are a nuisance to people or they are being hunted or harvested for their leathery skin or meat.

Using bullets to kill an alligator also inflicts minimal damage to the skin or flesh to get the most carcass remnants for commercial use.

Killing an alligator with a bullet appears to be a difficult task because they are tough to take down with a single shot. Yet, it is possible.

Let’s take a closer look at an alligator’s anatomy to explore why alligators are not bulletproof, yet seem so hard to kill.

The evolution of the alligator has given it protective scales, thick skin, and powerful jaws.

Alligators are covered with a dorsal dermal shield of an armor of osteoderms, or scutes. These are bony-scale-like plates that interconnect with each other protruding from the skin.

These scutes do not attach to the alligator’s skeletal structure. They offer protection, sensitivity for detecting movement, thermoregulation, and flexibility, as well as calcium sources for egg-laying female alligators.

While these bony scales are hard and thick, they shed and regrow, and do not necessarily make an alligator bulletproof. A properly aimed and powerful force of weaponry can kill them.

An alligator’s skin grows quickly from birth and continues to grow in thickness as it matures. This can range from 7 to over 17 inches as the alligator ages. For comparison, a human’s skin is about 0.07 inches thick.

An older alligator may survive a bullet wound better than a younger one due to the thickness of its skin. As with all wounds, an infection can result in loss of life even if the alligator manages to get away.

Like other animals with skin, an alligator’s skin (and scales) shed and regrow regularly. An alligator’s thick skin is rich with keratins and envelopes the alligator’s entire body.

Alligator skin is highly sought (farmed and hunted) for its use in clothing and accessories for its thickness, durability and density. Killing an alligator with a bullet reduces damage to the hide and meat.

Harvested alligator skin is not waterproof once it is removed from an alligator. It can crack, stain, and dry out.

Therefore, the hide is tanned, through a chemical treatment process, to turn it into leather for commercial and product use.

While the skin on an alligator’s underbelly is thick it does not have the same bony scales as found on the top of its body on its back.

These scales on an alligator’s underbelly and under its chin are smooth and supple. These smoother scales allow the alligator to glide in and out of the water with ease.

Often when walking, alligators keep their bellies low to the ground, protecting them from potential attacks.

Alligators have powerful jaws and skulls to deliver powerful bite forces (over 2,000 pounds per square inch).

Their skulls are covered with thick skin, tough scales, and integumentary sensory organs (ISOs). These sensory organs detect electric and magnetic fields, are a source of oily functional secretions, and sense pressure and vibrations.

The skull itself is a well-protected area except for a soft spot behind the skull plate.

Alligators can be killed with bullets, especially if they are hit in a fatal spot. It takes skill to hit the correct spots to cause a lethal wound.

Generally, more than one bullet is needed unless the first shot is perfectly aimed and penetrates the skin to damage an internal organ.

One quick kill spot on an alligator is a quarter-sized space behind the eyes, at the top and back of their skull, behind the skull plate. A 9-millimeter (mm) round will effectively penetrate here into the alligator’s brain or spinal cord.

If you shoot at the skull plate itself, fragments of bone may ricochet and cause injury to anyone nearby.

The eyes of an alligator are also sensitive and vulnerable spots.

While the underbelly is potentially more prone to injury than the back of an alligator, it would be difficult to wound this spot unless the alligator was flipped.

Even then, it would likely take multiple wounds to cause enough blood loss or injury to internal organs.

If you do not hit a kill spot, the bony scales can deflect a bullet or it may not go deep enough to cause a lethal wound. The same is true for the alligator’s cousin, the crocodile which can be found in both fresh- and saltwater.

Permits to raise farmed alligators or to kill them in the wild vary depending upon the state, and may only be allowed during alligator seasons. Otherwise, it is illegal to take matters into your hands outside of self-defense.

Alligators are intelligent creatures that cannot be tamed. There is much risk of injury or death when interacting with these powerful creatures, even if armed.

Typically, shotguns are not permitted for hunting alligators. Hunters prefer to use small caliber guns in order to preserve the hide for sale, such as a 9mm.

Bangsticks are explosive tools applied to the spot behind the skull plate.

Use of these involves restraining the alligator, holding it under the water, and discharging it carefully to reduce the chance of bullet or bone fragments back into the air.

Hooks and knives can penetrate the scales and skin and can be used to kill an alligator. In many instances, this requires the restraint of the alligator.

Professionals will leap onto the alligator’s mid-back, hold or restrain its jaw shut, and swiftly (and repeatedly, if necessary) stab a kill spot. Typically, great force is needed to apply enough pressure to get something sharp to penetrate.

Bow and arrow, harpoons, crossbows, and spear guns can also be used, but take great skill to accurately deliver a lethal wound.

Some hunters use fishing rods and lure to draw alligators in closer before killing them. In some states, baiting lines are illegal.

Are There Any Bulletproof Animals?

While any animal is susceptible to death by bullets, there are animals that have protective coverings that can deflect bullets. These include pangolins and armadillos.

Pangolins and armadillos have dermal armor that overlaps with scales made of keratin. The strong interlocking interface protects them from predator attacks, such as those from lions.

These creatures can roll into balls to surround themselves with protection, hiding any potential kill spots.

Other animals such as hippopotamuses, whales, and polar bears have very thick skin.  They can be harmed with bullets, but can often get away without lethal wounds.

An alligator is not completely bulletproof if an accurate shot or wound is inflicted upon a kill spot behind the skull plate, in their eyes, the underbelly, or forcefully through the scales and skin.

The hard bony scales can deflect bullets, and there is a risk of ricocheting bullets when they hit them. A bullet must have enough power behind it to penetrate an alligator’s thick skin.

Killing alligators is illegal in most states or requires a permit. It is done with caution and with the understanding that getting close enough to an alligator to kill it poses a risk of death to the hunter or professional.