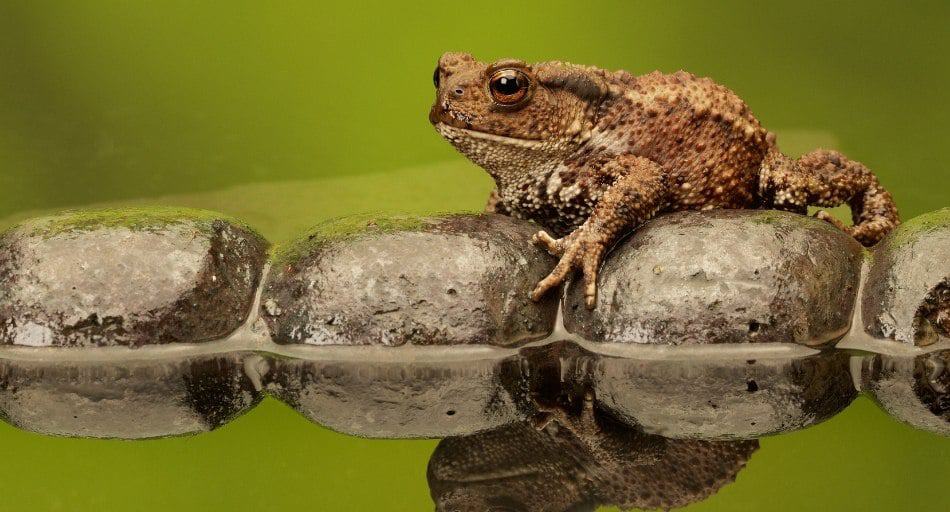 Have you ever wanted to learn more about toads? Like where they live, how big they are, or what they eat? Then you have come to the right place! Here we will learn all about toads and some other amphibians.

Do toads live in water? Yes, toads do live in and around water because toads are amphibians, which is a group of animals that is characterized by a few traits. First, all amphibians are cold-blooded, which means that they cannot regulate their own body temperature. Next, all amphibians have a backbone. Third, all amphibians do not have scales (this is what separates them from reptiles). Lastly, all amphibians live their lives partly on water and partly on land!

Find out how much you know about amphibians in our Amphibian Quiz – Are You A Frogman?

During the breeding season, toads breed in water. Female and male toads can be found around ponds, marshes, and even ditches- any place where there is fresh, stagnant water. After breeding, the female will lay thousands of eggs in the water. These eggs are covered in a jelly-like substance.

In a few days, the eggs will hatch and tadpoles will fill the water. At this point in the toad’s life, the tadpole does not have any legs and they breathe through gills, just like a fish. They spend all of their time in the water.

Eventually, these tadpoles will grow limbs and they will absorb their tail into their bodies. They will now look more toad-like and they can climb out of the water. Some toads may never return back to the water except to breed.

For the most part, toads tend to live away from the water and only return to the water during breeding season. They will create a shallow burrow in the dirt where they live. Then, since they are cold blooded animals, when it is time to hibernate, they will find a place to rest. This is usually under a pile of leaves, an old log, or even in their burrow.

RELATED: Are You Axolotl or Fire Salamander? Personality Quiz

Where in the world do toads live?

Toads can be found on every continent except for Antarctica. They usually like to live in a place that is moist and open, such as a field or grassland. Toads can even be found in backyards all over the world.

How many types of toads are there?

There are about 580 different types of toads that live all over the world! One of the most common types of toad in North America is the American Toad. This toad is found in the eastern and northern states of the US and its range extends into Canada. On the opposite side of the continent, the western toad lives in the western states and into western Canada.

What is the biggest toad in the world?

The largest toad is the cane toad or the marine toad. This toad is found in tropical parts of South America and Australia. On average, they grow to be about one pound, but the largest marine toad ever discovered weighed over five pounds and was over a foot in length!

What is the smallest toad in the world?

The oak toad is a toad that can be found along the coastal regions of the southeastern United States. The toad is usually only about an inch big when fully grown! They even received the nickname of “half grown toads” because of their petite size.

What do toads eat?

What other animals are amphibians?

Some other amphibians are frogs (of all types from bullfrogs to poison dart frogs), axolotls, and salamanders.

Do frogs live in water?

When frogs are tadpoles, they all live in water, just like toads. But once a frog becomes an adult, the amount of time that they spend in the water varies. Some frogs, such as bullfrogs or green frogs, will spend almost their entire adult lives in the water. On the other hand, some frogs, like tree frogs, spend most of their adult lives outside of the water, only returning to the water to mate.