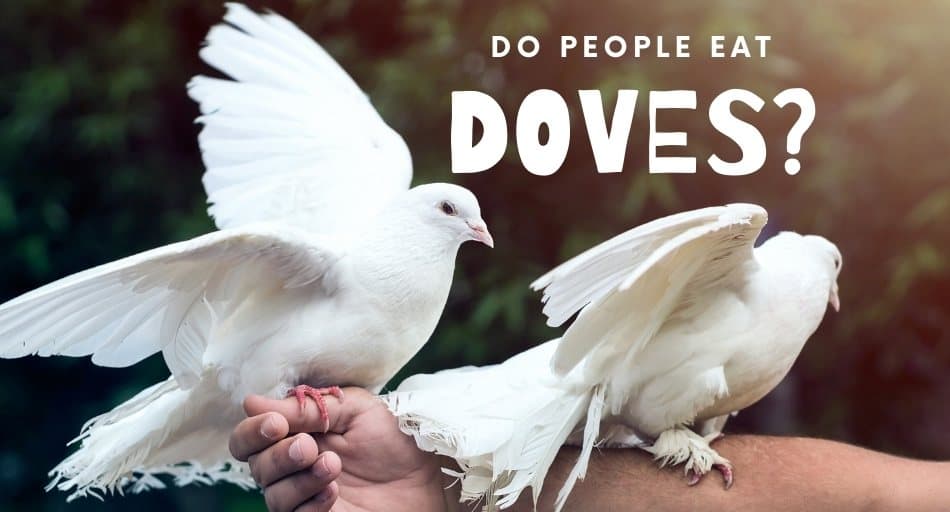 Doves are the international symbol of peace and have even been used during wartime since back in the 18th century. At this point, there’s no surprise that people around the world dine on uncommon foods. Since we eat and chicken, can and do people eat doves?

Yes, people eat doves! While they tend to bring a sense of peace to everyone, these birds make a tasty meal. I know it may sound weird, but it seems less like an oddity when you think about how we eat chicken, , and quail. While dove sounds like an unusual animal to eat, it’s way more common than you probably think.

If you ever speak to someone who has hunted and eaten dove in the past, you’ve probably been pretty curious about how these birds taste. Or if you’re like me, you’ve searched deep into the depths of the internet for a clear answer.

The general consensus about how doves taste is “they taste good if you cook them right.” But everyone’s taste buds are different, so what on Earth does that mean? Some people say that dove tastes similar to quail, but not as good.

Other’s refer to its taste being similar to other exotic game such as the bald eagle. But if you’re anything like me, you’ve never eaten bald eagle, so you have nothing to compare it to.

Other’s say that dove tastes sort of like a mild . Since is a popular protein to eat, I’d say that dove probably tastes pretty good. If you prefer white meat breasts, a dove is not going to be for you. The breast on a dove is dark meat, much like and geese.

How Do People Prepare Dove?

So dove tastes good if you prepare it correctly. How do people prepare dove? Similar to other poultry dishes, there are several ways to cook and serve dove.

One of the most popular dishes people use dove for is known as a dove popper. You’ll grill your dove and then wrap it in bacon and jalapeno. It makes for a delicious appetizer because let’s face it. Bacon makes everything taste better. But this is far from the only thing you can do with dove.

If you ask most people who have eaten dove or regularly eat it, grilling the meat is the best way to eat it. The second most popular way to cook a dove is by frying it. This way, if you’re cooking it with the skin on, you can get it super crispy while still having juicy meat.

The meat should still be a little pink, so don’t freak out if you eat it that way.

Another tasty way to enjoy dove is to rub it with Cajun seasoning before grilling. Rubbing it in Cajun seasoning makes for a delicious meal with a little bit of a kick. You can serve it alongside your favorite vegetable or starch.

Where Can I Buy Dove Meat?

If you’re interested in trying dove, you’re not going to be able to find this bird in your local grocery store. You’re either going to have to hunt for it, purchase it off a hunter, or sometimes European markets.

If you’re in the United States, you may not have a European market in your town, but if you speak to a local butcher, they may have some ideas of where you can get your hands on these birds.

Is It Legal To Hunt Doves?

Hunting doves is legal in many parts of the world, but not everywhere. In the United States and Canada, there are specific hunting seasons for most game, including these birds.

There are bag limits in most places, so you’ll want to make sure you’re reading up on the regulations in your area or where you’ll be going hunting.

Even though many states such as Florida and Alabama have legal dove hunting seasons, not every state in the country has a hunting season. In certain states, it’s illegal to hunt these birds regardless of if it’s hunting season somewhere else.

For example, in Maryland, it’s illegal to shoot a pigeon or dove.

What’s The Difference Between Doves and Pigeons?

Doves are those beautiful white symbols of peace, and pigeons are gross birds that fly around major cities, right? Well, to most people, these birds are very different. Most people think they look completely different and live in separate locations.

But surprisingly, there’s no actual scientific difference between doves and pigeons.

The names dove and pigeon are used to describe over 300 birds that all come from the same bird family. Scientifically, there’s no difference between the two, but people use the terms to describe the size of the birds in everyday life.

Some people use the term pigeon to describe one that’s a little bigger and dove for smaller ones.

How Many Species of Dove Are There?

There are 300 species of dove and pigeon in the world. Of those 300, 12 species have a home in the United States and Canada. The rock pigeon is the most common one in these countries, and it looks like many people know a pigeon.

Where Do Doves and Pigeons Live?

Doves and pigeons live everywhere! Whether you’re in the United States, Australia, or Egypt, you’ll find these birds. Doves live everywhere in the world except for the Sahara Desert and Antarctica.

There is no general habitat for these birds. Some of them live in the grasslands, whereas others live in cities or the rainforests of Brazil.