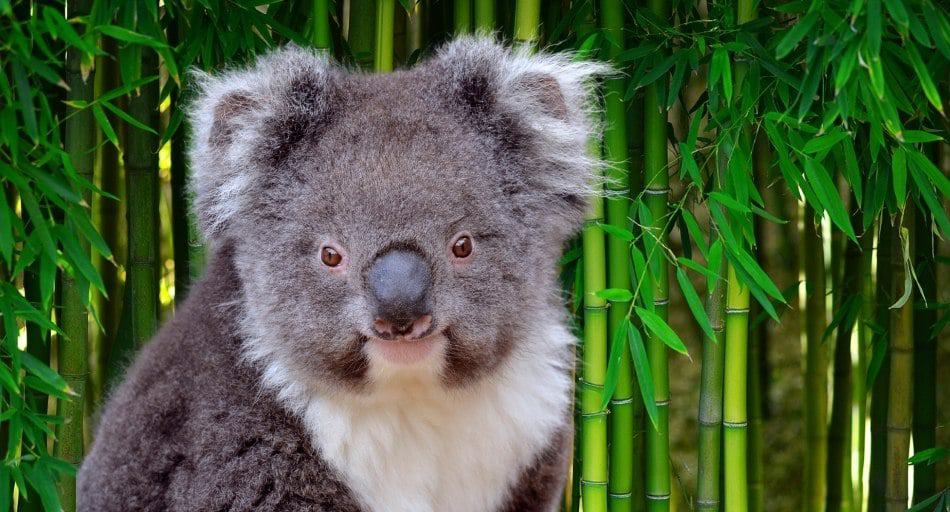 You may have seen some illustrations, or even pictures, of a koala hanging on to a stalk of bamboo. But how realistic is this? Do koalas actually eat bamboo?

Do koalas eat bamboo? Koalas do not eat bamboo. Instead, they eat eucalyptus leaves! And koalas absolutely love their eucalyptus trees – they rarely leave the trees that they eat from and they can spend up to 18 hours a day sleeping in their tree. Then most of the time that they are awake, they will spend it eating eucalyptus leaves.

Because of this, koalas even have a scent that is similar to that of the oil from the eucalyptus leaves. Additionally, eucalyptus leaves are poisonous. So how do koalas eat them? Koalas have a special digestive tract that can counter the effects of the poison.

RELATED: Are Koalas Friendly Or Dangerous?

Do koalas eat anything besides eucalyptus leaves?

Do koalas even live near bamboo?

Since koalas do not eat bamboo, you may be wondering what animals around the world do munch on this grass. There are three animals that eat a diet of exclusively bamboo. These animals are giant pandas, bamboo lemurs, and bamboo rats. Other animals, such as red pandas and golden monkeys, will also eat bamboo on occasion. Additionally, humans can eat cooked bamboo shoots!

RELATED: Are Sloths Monkeys? (+ do they die when they poop??)

While some people call koalas “koala bears,” they are not actually bears! Instead, koalas are marsupials! Marsupials are a group of mammals that have pouches! All marsupials give birth to their young live and then the babies climb out of the birth canal and into the pouches where they finish their gestation. Marsupials are like other mammals in that they are covered in hair and they nurse their young. Other marsupials include kangaroos, wallabies, wombats, and possums.

How big do koalas get?

Koalas are usually about two to three feet tall when they are fully grown. Their weight is actually dependent on where the koala lives. Koalas that live more to the north usually weigh around nine to nineteen pounds. Koalas that live more to the south weigh a bit more- these koalas can grow to be about fifteen to twenty-nine pounds. On average, male koalas weigh about fifty percent more than female koalas.

According to the Australian government, koalas are considered to be vulnerable. They estimate that there are about 43,000 to 80,000 koalas left in the wild. The International Union for Conservation of Nature (the IUCN) says that koalas are considered to be “least concern” because they have such a wide distribution, a fairly large population, and are reassured by the fact that the koala population is not declining at an alarming rate.

What are some interesting facts about koalas?

The word “koala” comes from an Aboriginal word that means “no drink.” This is because koalas rarely drink water- instead, they get up to ninety percent of their hydration needs from eating eucalyptus leaves. Another neat thing about these animals is that they have fingerprints! Most mammals do not have fingerprints as humans do – koalas and primates are the only ones to have them.

Koalas usually live to be about ten to fourteen years in the wild. Lastly, even though a koala’s fur looks so soft and cuddly, their fur (which can range from grey to red to brown) is actually coarse – it is almost like wool. This is beneficial because it repels water to keep the koala dry when it rains.