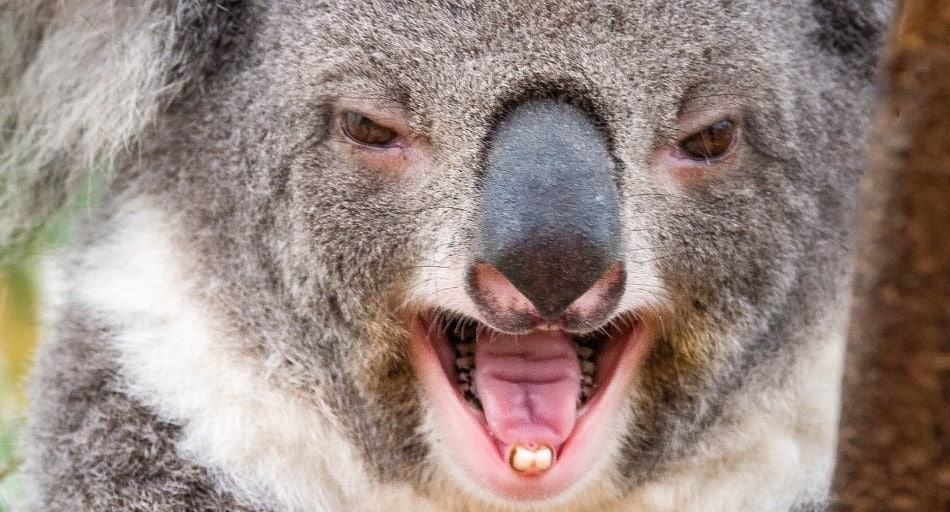 Koalas are Australia’s most recognized animals. Considering their cute teddy bear look, people wonder what they actually are and if you can hold them. Let’s start by saying koala is not a bear and is more common with kangaroos and wallabies.

Koala is in fact marsupial. An adorable look makes people want to hold them, but that might not be a great idea.

Are koalas friendly or dangerous?

Although koalas seem friendly, they can be very dangerous, and they are wild animals, after all. Captive koalas that were born and raised in a zoo still experience stress when being approached by humans, and that’s why they shouldn’t be pet by untrained people, like any wild animal for that matter. If they feel threatened, they might even chase you off.

Is it safe to touch a koala?

To avoid stress and fear from humans they don’t know, koalas should only be held by accredited personnel, such as trained rangers. Selected sanctuaries and wildlife parks will allow visitors to touch a koala and even hold it but under strict supervision and keep the health and safety of koalas in the first place.

Can a koala kill you?

Koalas have been known to go after smaller animals and even humans, but it is unlikely that koalas will kill you. They have one-inch claws for climbing the trees, claws that can turn into weapons and cause severe injuries if they feel threatened.

Their bite is not a piece of cake either. Although highly unlikely that koalas will actually kill you, their bite can cause injuries and infection if not treated on time. In most cases, koalas are the ones who get hurt by other animals and careless drivers.

READ NEXT: Do Zebras Live In The Jungle?

Can you get STD from Koala?

Even though two or three of the major STDs (in humans) have come from animals, it is highly unlikely you will get STD from koalas.

There are two strains of Chlamydia; Chlamydia pecorum, which is responsible for most of the outbreaks in Queensland and, most importantly, cannot be transmitted to humans.

The possible infection comes from the second strain, Chlamydia pneumoniae, but only if an infected koala were to urinate on someone, which is not likely to happen.

How did koalas get Chlamydia?

Koalas are vulnerable animals, and their population declined due to loss of habitat, dog attacks, rapid urbanization, and, believe it or not, Chlamydia.

No one actually knows when or how koalas got Chlamydia in the first place, but signs of the disease were spotted already in the late 19th century; even naturalists then didn’t know that it was actually Chlamydia.

READ NEXT: Do Sharks Eat Crabs?

How do Koalas get Chlamydia today? Well, the same way humans get it too. The disease is sexually transmitted as wild animals don’t practice safe sex, and possibly also by close contact and flies.

Koalas suffering from Chlamydia have a good chance of recovery if they are treated in the early stages of the disease (antibiotics or vaccine). There is also a group of researchers in Australia who are working on a Chlamydia vaccine for Koalas as a step towards a human vaccine.

Koalas have a slow lifestyle, they rest a lot, and the reason is that their doesn’t provide a lot of energy and it’s low in nutritional value (Eucalyptus leaves). Koalas also sleep 20 hours a day, but that might be their way of coping with extreme heat by resting against cooler tree trunks.

What is Interesting is that koalas, despite their slow and lethargic appearance, can, if frightened and in distress, run on the ground at around 30 kph, so I wouldn’t call them lazy just yet.

READ NEXT: Are Bullfrogs Poisonous?

Can you pick up a wild koala?

If you encounter a Koala in your neighborhood or you find it in a local park, you shouldn’t touch it or pick it up unless you are sure the animal needs urgent medical attention, and that should be the only reason to pick them up.

Even then, you should call wild animal rescue services to deal with the animal in the most appropriate way and keep it safe.