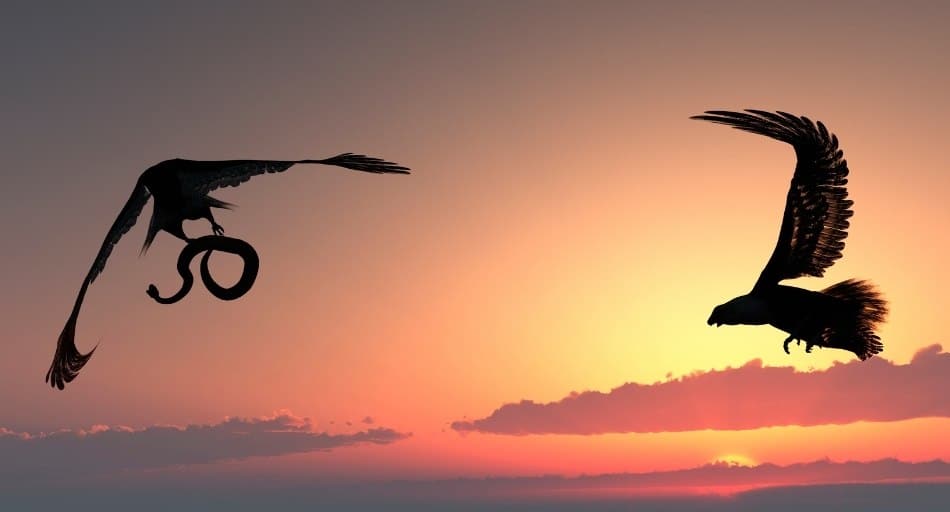 The bald eagle is the national symbol of the United States and this powerful bird can only be found in North America. But did you know that there are dozens of different types of eagles and that most of the many eagle species live in Eurasia and Africa?

We’ll take a look at some different eagles and if they are predators to another powerful animal – snakes.

Do eagles eat snakes? Eagles do eat snakes! While snakes are not the main source of for most eagles, these birds do eat snakes if they are able to catch one! There are more than sixty types of eagles throughout the world. There is one type of eagle that is especially an expert at catching snakes.

The aptly named snake eagle is a bird that lives mainly in Africa, but on occasion can also be found in parts of Europe and India. Snake eagles are a little bit smaller than bald eagles, but these birds fierce hunters.

Snake eagles have very thick scales on their legs and feet that act to protect them from snake bites. This is especially important for these eagles because they will sometimes try to hunt some deadly snakes, like cobras or black mambas. These eagles will also eat lizards, rodents, bats, or fish.

America’s national bird does eat snakes. This bird will live near water. There, they will hunt on a wide variety of prey, including fish, ducks, snakes, turtles, rabbits, and muskrats. Eagles will also scavenge and eat a dead animal if they come across one. Bald eagles have a very strong sense of sight and will swoop down on their prey and grab them in their talons.

Bald eagles can fly at speeds up to 100 miles per hour – this allows them to swoop down on their prey, like snakes, quickly and take them by surprise.

Do any snakes eat eagles?

Eagles are known as apex predators. This means that they do not have any natural predators. With that being said, some snakes will eat the carcass of a dead eagle if they find one.

What happens if a snake bites an eagle?

If a snake were to be able to bite an eagle in a fleshy part of its body, then it could cause harm, or even death, to the eagle. But this is extremely rare. This is because eagles have some advantages since they are at the top of the chain.

Like how the snake eagle has tough scales on their legs, all eagles have scales to protect their legs and feet. If a snake were to try to bite there, its fangs would most likely not be able to get through all the scales. Even their bodies have the protection that you may not think about – all those feathers!

Eagles are heavily feathered and snakes have slanted fangs. These fangs will have a hard time penetrating the feather armor of the eagle. Lastly, eagles will strike the snake quickly and efficiently, which does not give the snake a lot of time to fight back. So even if an eagle is after a venomous snake, they will likely be okay.

READ NEXT: Do Anacondas Have Teeth?

How strong are the eagle’s talons?

An eagle’s talons are made up of keratin, which is the same material that makes up our nails. Eagles have four toes on each foot and three of these toes act like fingers. The fourth toe acts almost like a thumb (this is called the hallux talon). Each talon is about two inches long.