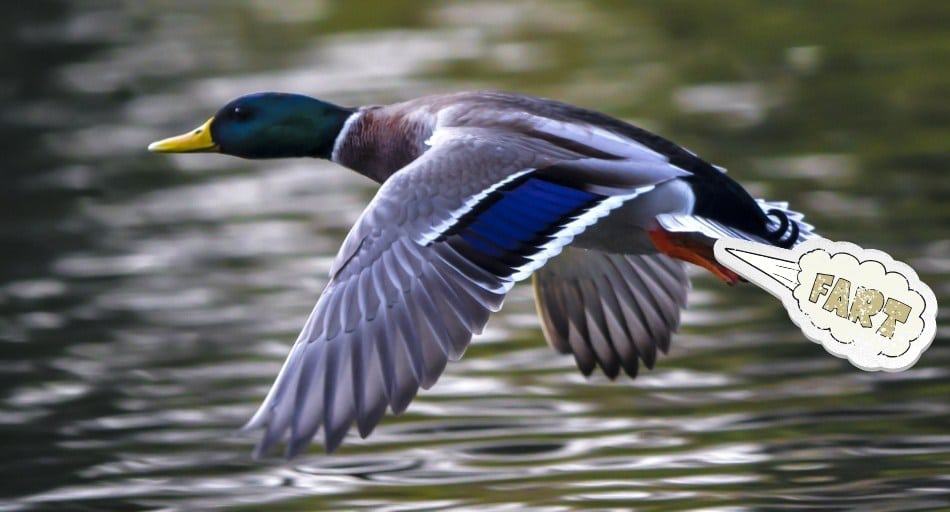 A fart is a shot consisting of Kahlua, Irish cream, and whiskey, and it is said to be named after the sound you make after drinking one. But does this creatively named drink refer to a real existing natural phenomenon? Do ducks fart?

No, up to date there has been no evidence that any bird farts. There are several theories to explain this. For one, it could be possible that they do not have the stomach bacteria that builds up gas in the intestines. Additionally, it is observable that birds have a very fast digestive system. simply does not spend enough time inside them to ferment and form a gas.

The intestines of mammals are long and fecal contents travel through them quite slowly. This leads to fermenting and also the build-up of gas necessary for an explosive fart. Avian intestines – the intestines of birds – on the other hand, are very short. Digestion is quick and any waste is expelled within minutes.

Depending on the species, birds poop between every 5 and every fifteen minutes! Therefore, no gases build up. While birds have theoretically the ability to fart – they own the necessities of firstly, a digestive system that breaks down , and secondly, an anus from which gas can be emitted – they simply do not need to.

Todd Katzner from the National Aviary in Pittsburgh suggests that it is more likely that birds would emit gasses via their beak, rather than their anus. In layman’s terms: it makes more sense for birds to burp than to fart. After all, bird parents regurgitate half-digested for their babies, so we already know that they are capable of disgorging their stomach contents.

Many birds like ducks, geese, and parrots are capable to produce fart-like noises, but when you hear something like this it is likely that they made this sound with their beak or throat and it is a means of communication rather than the emission of gas.

Is Poop Poisonous to Dogs?

Because they poop so often, the area around a lake or pond where ducks live is often covered with their fecal matter. If you want to take your dog for a walk there you might be asking yourself whether this is safe. After all, dogs will put anything in their mouth.

There are indeed two main illnesses that dogs could develop when they ingest bird poop: histoplasmosis and chlamydia psittaci. Histoplasmosis is a fungal infection that comes from ingesting contaminated soil or animal feces. Symptoms include weight loss, diarrhea, loss of appetite, and depression.

Chlamydia is usually thought of as a sexually transmitted disease, but dogs can also catch chlamydia without having sex when coming in contact with infected dried bird poop or a bird carcass. The easiest way to recognize whether your dog has chlamydia is by looking into their eyes.

When they paw at their eyes a lot and the eyes look swollen, red, or watery, this might be a sign of chlamydia. Sometimes it also affects their respiratory system and they will pant more and sound out of breath all the time.

Do Ducks Have Teeth?

No, ducks do not have teeth in the same way other animals and humans have. Their beaks are modified in several ways, though, that enables them to consume like nuts and fish. For one, the spatulate shape of their bill helps them to crush similarly to how teeth would.

This flattened shape is also helpful for filtering from mud or water. On the side of their bill ducks have so-called lamellae. These are thin, comb-like structures that kind of look like serrated teeth. They are the reason why many people think they have seen teeth in a ‘s bill.

RELATED: Do Ducks Eat Meat? (Do They Get Sick)

Other than teeth, lamellae are pliable, though, and are another helpful feature for filtering from the water.

On the tip of the upper side of their bill, ducks have a small bump called a nail. This bump is helpful for digging in the ground and exposing roots, seeds, and worms.

When feeding ducks at the local pond it is important to keep in mind that ducks do not chew their ! Sometimes their gets broken into smaller pieces inside their bill, but they do not deliberately chew. Therefore it is important to not feed them pieces that are so big that they would cause choking.